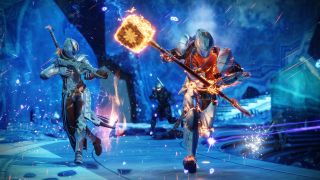 Update: That "reasonably smooth" rollout has hit a bit of a snag. After moving a little past 214,000 peak concurrent users on Steam, Bungie was forced to pull the plug for reasons unknown. We'll be monitoring the situation and will post updates when they become available here.

Destiny 2 deployed on Steam today and while there were a few Beavers and Weasels spotted roaming around, for the most part it seems to have gone reasonably smoothly. I was able to get in quickly and painlessly (after an hour of "unpacking"), and the usual PC Gamer Destiny stalwarts have been unusually quiet for the last couple of hours. That said, at time of writing, there has been a wave of players getting booted...

Destiny 2 went back online at 10 am PT/1 pm ET today, and the full maintenance period wrapped up a couple hours later. Bungie warned that access might be a little spotty during those hours, but enough players were able to get in to push it to fourth place on the Steam Top 100 list: When noon PT rolled around, a peak of 211,161 concurrent players had been achieved, more than double the daily peak concurrent player count of the fifth-place game, Rainbow Six Siege.

That's an awful lot of people playing Destiny 2, but it's still a far cry from the true heavyweights in the top 3. PUBG, in third place, peaked at 570,466 concurrent players today; CS:GO reached 606,854; and Dota 2 led the way with 607,845, although it's since slipped into second place behind CS:GO.

The peak player count slid a bit from its peak after the end of official maintenance, to 209,498 concurrents, but that could be related to server issues: Hardwaremeister Jarred Walton, who I am sure is only playing Destiny 2 for research purposes, said that was booted to the main menu after playing part of the intro mission and getting to The City. It's bounced back since, and as of right now is up to 214,100 concurrent users, and may well see big boosts over the next few hours as Eastern and Pacific time zone folks get out of school and off work.

Overall, I think it's a fairly strong start. Big numbers could reasonably be expected because Destiny 2: New Light is free, but that's counterbalanced by the fact that it's also two years old and doesn't carry the urgency of a brand-new game.

More interesting will be how it holds up over time: Does it remain a top-five game in a month (or a year), or does it sink into the middle of the pack, somewhere between Warframe and Left 4 Dead 2? I expect something close to the former—top ten, at least—but the simultaneous storefront shift, free-to-play transition, and major expansion release, all at the same time—that I'm not committing to any predictions just yet.