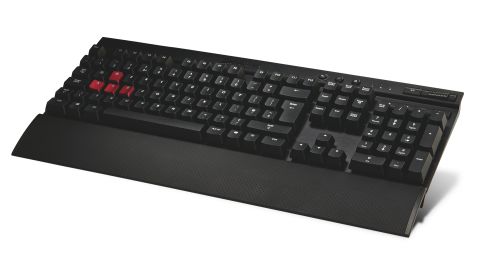 A beautiful, robust gaming keyboard and my favourite mechanical switch board around

When it comes to gaming keyboards, it's all about the mechanical switch keys. Corsair have used them to make some seriously good boards but the new Vengeance K70 is my current favourite. I've been using its keenly admired predecessor, the Vengeance K60, as my main workhorse since the range launched in spring 2012. That wasn't without its problems, but Corsair have listened, and polished up almost all of those faults in this pricey but excellent addition to the series.

So what's been fixed? The original Vengeance boards only used the mechanical key switches on the main layout, for one, leaving the function and navigation keys on the ol' deadened membrane switches. This created a inconsistent feel that's vanished for the K70. You'll find Cherry MX Red switches under every key on the board here. Corsair have also updated the range so you can choose either Cherry MX Brown (for less noise) or Cherry MX Blue (similar in performance, but with audible clicks).

Likewise Corsair have decided to add individual LED backlighting to each key too. The red glow that emanates from below each key looks stunning, and makes the keys pop nicely in low-light.

I also still experience occasional problems with my K60, for example it will sometimes stick deleting things I'm writing, like some ghostly sub-editor. I've noticed none of these inconsistencies when using the updated K70. What's more, the rollover - the number of keystrokes the board can process at once - has been buffed from 20 keys to the whole set. The K70 now sees all and knows all. With a 1,000Hz polling rate it should be one of the most reliable boards around, too.

It also now comes in a rather stylish matte black anodised aluminium finish. And, for my money, is all-told the best-looking keyboard you can pick up. That combination of red LED backlighting and matte black base is beautiful. Indeed I've had people pass my desk and stop to comment on the keyboard I'm bashing out words on.

As well as fixing the problems with the previous versions, the K70 contains all that was good about the original Vengeance peripherals too. Namely outstanding build-quality, simple volume and media controls, replacement, textured WSAD keys and Win-key disabling. The only thing this version is lacking is the macro functionality of the pricier Vengeance K95 update, but for most of us gamers that's not going to be terribly vital, or even missed in the slightest.

At £120 / $130 it's not a cheap board, and is a good chunk more than Gigabyte's surprise package, the Aivia Osmium , but it is a great gaming keyboard and robust enough to last for years.

A beautiful, robust gaming keyboard and my favourite mechanical switch board around