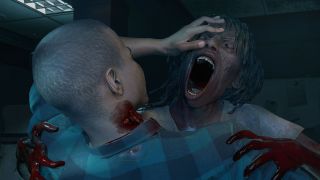 'Project Resistance was revealed last week as a team-based spinoff of the Resident Evil series. Four players, each with unique abilities, must work together to survive and escape the clutches of the Mastermind, who for whatever reason is out to kill them with traps, zombies, and Mr. Sex—or, as he's officially known, the Tyrant.

Fans of the series weren't universally thrilled with the concept. Some, such as in this Reddit thread, are unhappy that it's not a full-on Resident Evil game, while others may simply be mindful of what happened with the previous multiplayer Resident Evil game, Umbrella Corps. But Capcom producer Matt Walker defended the game on Twitter, said that Capcom needs to do more than simply recycle existing ideas if it wants to remain relevant.

"Been seeing a lot of people who are not pleased with the idea that we're making Project Resistance. It's totally valid that people want more of that quality core experience offered in RE2 and RE7. My take: we as a company need to continue to branch out and try to offer up new gameplay in addition to refining the experiences people expect from us. If we just continue to offer up the same thing over and over again, people will gradually lose interest with what we're making. Project Resistance offers up a really interesting way to do that," he tweeted.

"The most important part? That it's a great survival horror experience, if non-traditional. I think we confuse things when we make things related to IP that don't actually stay true to the core spirit of the IP, but this project happily doesn't fall into that trap."

Walker said the closed beta will enable players to see that despite being multiplayer, Project Resistance is really "survival horror at its core." He also emphasized that Capcom is looking for feedback from players in order to improve the game, and that based on that, "it could grow from a project to a fantastic game," and that people who have played the game so far have been "positive" about it. That in itself doesn't mean much in this pre-beta state, though: We were positive on Umbrella Corps in early 2016, but the final release ended up being one of the worst Resident Evil games we've played.