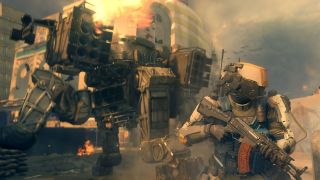 Around half an hour into this video (here, let me help with that) you'll find the start of the hour-long esports reveal for Call of Duty: Black Ops 3 that took place live at Gamescom this week.

Apparently it's the first ever footage of the competitive multiplayer from the game, so if that's your kind of thing it's probably worth a watch. They also have some of the best players in the world on stage playing, so you won't have to watch developers fumbling with performance anxiety in their own game. Commentary is supplied by the very sharply dressed Matt 'Mr X' Morello and Clint 'Maven' Evans,

Unfortunately, it's on PS4, like the demo Emanuel played for his preview, but you get to see some new maps and abilities. If that doesn't help, maybe reading over the system requirements will soothe you.