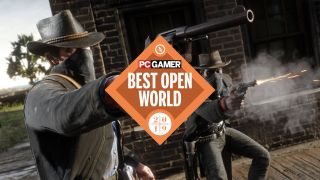 The winner of our Best Open World award is Rockstar's sublime Red Dead Redemption 2. We'll be updating our GOTY 2019 hub with new awards and personal picks throughout December.

Chris: It's not just the breadth and beauty of the world Rockstar built but the amount of things to do in that world and the lack of real pressure to do any of them until you're ready. RDR2 doesn't have the desperate insecurity of a Ubisoft world where every meter of the map has a shotgun spray of icons or a rampaging animal bursting from the bushes, as if a mere moment of silence will leave players confused and unsure of what to do. There are plenty of radiant encounters in RDR2, but you're welcome to ignore them while you ramble, and there are just enough animal attacks and roadside robberies to keep you on your toes.

And, of course, it's a gorgeous and incredibly detailed place to spend your time, from the foggy bayous in the south to the freezing mountains in the north; from small, dusty towns to the bustling, sooty city of St. Denis. The wildlife is widely varied and realistic—it's fun to watch hawks swoop down and pluck fish from a lake or squirrels scatter at the approach of your horse. Dramatic shifts in the weather often leave me staring in wonder at a massive lightning storm—though RDR2 does tend to overdo it on the fog. Exploration is rewarding and can lead to some fun and surprising discoveries if you're diligent, including a vampire, a UFO, and even a time-traveler.

James: And then there's Red Dead Online, which we'll surely be talking about for years. It's going to be the perfect haven for old west roleplayers, a massive stage on which I will give my greatest performance: wizened mountain-dwelling varmint hunter.

While it's lacking a lot of the finer touches found in the singleplayer, there's still something special (and horrifying) about spending a few hours lazily floating around a pond, fishing with a friend in what might be the most advanced, expensive entertainment simulation ever made. Because it's the simple pleasures that truly make RDR2 so engrossing. The world is so vast and all-encompassing that I can come up with my own goals and trust it to provide the means to follow through. If I want to plan a roadside robbery and steal another posse's hard-earned furs, I can. If I want to run around St. Denis and invite everyone to the saloon for a barroom brawl, I can (and did). Or if I just want to live a simple life, selling furs to someday earn enough for a nice hat and parka, I can (and will).

Phil: An open world can live or die based on the character whose eyes you see it through. Arthur is the perfect companion for exploring Rockstar's world, because he's both charming and flawed enough to fit naturally into whatever situation he's placed into—whether its robbing a train or escorting suffragettes.

Andy K: One of the most striking things about this world is how perfectly it captures the organic feel of the natural world. Whether it’s a raging waterfall, a rolling plain, or a snow-capped mountain range, Red Dead 2’s landscapes are all convincingly rugged and dense. I’ve lost hours to just rambling aimlessly through its varied biomes, wondering what I’ll find out there in the wilderness. This game is a lot of things, but its world makes it one of the finest walking simulators on PC. Holster your gun and soak it in.