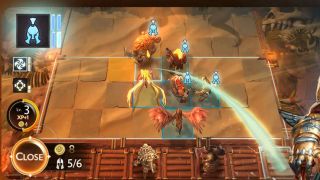 What are the best Chess Royale comps? If you’ve already got to grips with how to play Might & Magic: Chess Royale, but are struggling to find your way to the top spot of Ubisoft’s 99-player autobattler, I'm here to help you take the next step.

With all the various units at your disposal, choosing between them all and putting them together in the best possible way can feel daunting. So here are my favourite Might & Magic: Chess Royale comps to help you breeze past the competition.

Each unit in Chess Royale has a type which determines whether they're resilient tanks, damage-dealing ranged or melee-DPS characters, or supports with a focus on healing or crowd control. While it’s a good idea to aim for a diverse spread of types, focusing on each units’ two synergies is more important, as these help to unlock extra abilities that can turn the tide of a battle. Here’s what they do:

Fortress: An army with three or more Fortress units grants players a 10 percent chance to earn one extra gold after each kill. There’s a slim chance that this will boost your economy enough to help bolster the rest of your team, but it’s a risk outweighed by the need to build towards a synergy that offers no combat bonuses.

Haven: If you can find four Haven units, this is a powerful synergy. It allows relevant units to survive for three seconds after ‘death’—that's easily enough time to turn a fight around.

Necropolis: Similar to Haven, but not quite as powerful. Necropolis units return as two-star Ghosts after death. This can be a great value synergy, as your dead one-star units get a handy boost, but you’ll also need a powerful front line to keep you in the fight.

Stronghold: Once you have three Stronghold units on the board, if one dies, another random Stronghold unit gains an 80 percent damage boost. It’s powerful, especially if it stacks on the same unit, but requires a little luck.

Sylvans: If you have four Sylvans on the board, each unit gains a 15 percent chance to deal a large amount of damage to nearby foes. This is a particularly potent synergy thanks to the resilience of many of the Sylvan units, but you’ll need to find all four to activate the effect.

Dungeon: Dungeon duplicates a random all unit (at a maximum of two stars) when the battle starts. If you get a good unit, this can be great, but it’s equally likely to select a weaker alternative.

Dragon: Dragons grant 50 mana to allies around them at the start of each round, making them an excellent fit in any team, as they offer a synergy to all other units. You can only have one in each team, however, as any more will automatically deactivate the effect.

Spirit: If you have 2/4 Spirit units, all enemies will have their armor reduced by 3/6, making this a potent synergy for physical teams like Warrior and Stronghold.

Warrior: 2/4 Warrior units grant 10/40 percent damage to all Warriors on the board. This is a tricky synergy to establish, as it requires the expensive Fire Giant to get the most from its somewhat weaker other units, so you’ll want to have a backup while you’re building towards it.

Guardian: If you need a tank-heavy front line, having 2/4 Guardian units increases armour of all ally Guardians by 4/10. This is a decent early-game synergy, but you’ll need to look elsewhere for extra damage.

Mage: Similar to Spirit, 2/4 Mages reduces enemy Magic Resistance by 10/30 percent, making it a useful addition to Sylvan and Necropolis teams. This is slightly more reliable than Spirit, as its units benefit quicker from the buff.

Assassin: 2/4 Assassin units increases the critical hit chance of all Assassins by 5/20 percent. It’s not particularly powerful early on, but if you get all four units, it’s much more powerful, and can stack effectively with Stronghold.

Once you know what the different synergies do, it’s time to start building your armies towards them. Here are the most powerful compositions I’ve found so far.

Winning the first few rounds is crucial to success in Chess Royale: not only do you earn more money as more players drop out, you maintain a greater safety net ahead of the late-game. With that in mind, aiming for a high-damage composition can be useful for overwhelming your opponents in the first few rounds. Gnoll and Orc can both be purchased from round one, which grants the Warrior synergy straight away.

From round two you can add Harpy to the pack and unlock Stronghold. Placing her towards the back of your army means that Orc will likely die first, granting her a powerful boost. If you can find Justicar early on, you’ll also grant Harpy higher damage thanks to a critical strike chance boost via the Assassin synergy. With a few upgrades, this early-game comp should give you enough damage to last for the rest of the game, which gives you space to build towards tanks and supports to form your beefy front line. Consider adding Cyclops to round out the Stronghold synergy, or look to other Haven units to build around Justicar.

None of these synergies deal much damage, but if you can bring them together in the late game, you’ll have a team that’s almost impossible to kill while putting out plenty of area-of-effect disruption. Look for Rune Priest and Druid to activate Mage as soon as possible, before adding Dryad to keep your units alive (Ghost and Troglodyte can be useful additions thanks to the Spirit buff, but are too weak to focus a team around).

This is a risky composition, as you’ll need Green Dragon and Treant to activate the Sylvan buff, but doing so offers significantly more damage to otherwise tank/support units. Place Green Dragon and Sylvan in the middle of your army to ensure that they offer healing/mana boosts to the greatest number of units possible. Complete the comp with Zealot for extra healing, or consider more damage with characters like Harpy.

This composition relies on letting characters die to get the most out of them. Not only is it difficult, but it's expensive, too. However, it doesn’t really benefit from tanks or healers and it can be weak in the early game unless you can upgrade your units fast. First rely on units like Ghost and Justicar, then complete the synergies once Lich and Vampire unlock in later rounds.

Then focus on more prevalent Stronghold units, which also benefit from death and are much easier to find in early rounds. Towards the end of the game, your Necropolis units won’t only be ignoring death, but Lich—who is key to this strategy and should be kept alive as long as possible—will be spawning in a host of low-tier units which should distract your enemies from the real threat until you can finish them off.