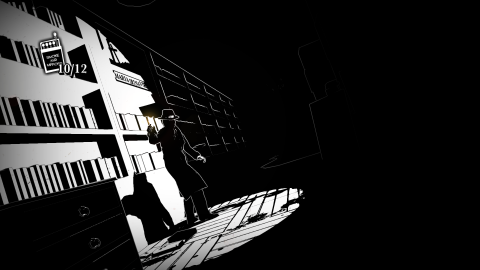 A great looking game, but its beauty is only skin deep.

One dark evening in 1938, a nameless man drives through the night. Swerving to avoid a figure in the road, he crashes his car and limps to a spooky mansion, hoping to find help. Stumbling through the darkness, he begins to find locked doors and scribbled journals, mysteries and memories. His troubles are just beginning, and so are White Night's.

The look and feel of White Night, the third-person noir horror adventure by Osome Studios, are wonderfully done. The screen is divided into stark black and white, darkness and light, and the only way to illuminate the gloom is by using matches found around the house. Your trenchcoat has the tiniest pockets in video games history, allowing you to only carry twelve matchsticks at a time, and the moments when the lit match sputters, and you must wait in the darkness while you attempt to light a new one, are terrifically tense.

You're not alone in the house, naturally, for in the darkness lurk grim specters who don't want you there. Believe me, angry ghosts, after about a half-hour I didn't want to be there either. While initially intriguing, not to mention spooky as hell, I found that every time I cozied up to some appealing element of White Night, it quickly drove a sharp elbow into my sternum.

Stagger into the light

The fixed camera, for example. At times it's excellent, such as when it remains in place while you slowly recede into the distance until you're standing in a tiny pool of light on a nearly pitch-black screen. It can also be unsettling, as when it appears to be watching you through a window from outside the house. More often, however, it's teeth-gnashingly irritating, such as when you run through a room and the camera angle swaps three times in five seconds, leaving you confused as to where you were even going. Sometimes the camera shifts a complete 180 degrees, meaning the room you were entering by pressing the W key, you're now leaving by pressing the W key.

This can be a slight nuisance when you're slowly shuffling around, but when you're on the run, pursued by one of the mansion's instakill phantoms, it can be positively aggravating. Fleeing toward a doorway during a camera swap can completely turn you around and you'll wind up rushing headlong into the ghoul, which ghost-slaps you to death. Successful escape eventually boils down to rote memorization, not just of the mansion's layout but of when each camera change will occur so you can adjust your direction. If ghost attacks were less frequent, it might be less of an issue, but they only grow more common as you play.

Even the look of the game, which I love, eventually begins to hurt the experience. Considering the mansion is essentially pitch black, telling one room from another is extremely difficult, and I found myself repeatedly examining the same paintings and journals and items, unsure if I'd visited them before. You have to walk right up to items and point your character into a very narrow angle of approach before you can even tell if you can interact with most objects, adding to the already clumsy exploration.

While I liked the story itself, it isn't a particularly well-told tale, related to you in voice-over, on-screen text, and journal entries, which often all give you the same bit of information repeatedly. Like everything else about White Night, it only half-works. The fright and tension, very effective at the start, quickly evaporate, leaving you not afraid of the dark but simply cursing it.

I'm sure she's fine. Now! Off to the spooky mansion!

A few electric lights dispel gloom and keep ghosts away.

Let's go to the graveyard. Nothing bad ever happened in a graveyard.

A great looking game, but its beauty is only skin deep.