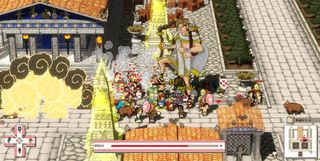 I had never heard of Okhlos before playing it at PAX South today, but it quickly got my attention. It plays sort of like a twin-stick shooter, but instead of aiming a gun you're directing an ever growing mob of angry, Greek citizens that continues to grow more raucous until they are able to level buildings and kill the gods themselves. I spoke with developer Roque Rey Ordonez to learn more about Okhlos—watch the whole interview above.