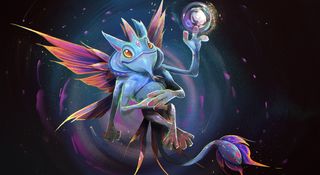 Yesterday, Alliance drew a line under a bleak year, beating LGD Gaming 3-2 in the World Cyber Arena grand final to win $370,000. Almost as if this were choreographed fan service, Alliance clinched victory with the same line-up that won The International 2013: Loda, s4, AdmiralBulldog, EGM and Akke.

After the team's disastrous elimination from The International 5 qualifiers in May, this win has to be all the sweeter for beating Chinese team LGD on their home turf. After two matches, it looked as if the visitors were going to embarrass LGD with a clean sweep, but MMY's Lion bought LGD time in game three, forcing Alliance to concede by the 30-minute mark. A 22-minute stomp in game four brought the score to two-all. The simmering final bout boiled over with a spectacular counter-push from Alliance which claimed two lanes of racks without casualties and all but decided the game, despite a stylish Aegis steal by rOtK on Clockwerk.

Unfortunately, the tournament was marred by what many perceived to be poor and sometimes baffling quality. The only Dota to be played on-stage was the final—the rest of the matches were streamed. Players were seated on plastic fold-out chairs, padded with their own jackets. There was nowhere to buy food at the venue, and Alliance manager Kelly Ong ended up relocating the team to a net café to train. Meanwhile, another Chinese team, Newbee, decided to forfeit their matches two hours before they were due to start—they didn't even get on the plane. To top it off, a Tweet from Erik Barge claims that LGD got wind of an Alliance Rosh attempt because the booths weren't soundproof.

Apparently the Chinese casters called out the Rosh attempt by us and the booths aren't soundproof.December 20, 2015