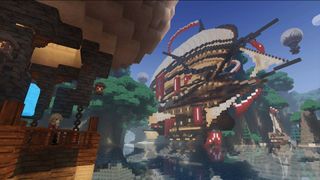 A voxel, simply put, is a three-dimensional pixel. They've been around for ages—NovaLogic used them to great effect in the mid-90s, in the Comanche series—but these days people tend to think of them solely in terms of Minecraft. And Minecraft is clearly one of the inspirations behind Voxelnauts, the VR-friendly MMO that recently turned up on Kickstarter. But it aims to go far beyond Minecraft's boundaries.

The central idea is that Voxelnauts will consist of thousands of planets, each of them unique, with its own items, monsters, story, and rules of play. Developer Retro Ronin will create some of the worlds, but many will be built by players through the use of internal and external tools like Blender and MagicaVoxel. To help the process get up to speed, the game's first planet, called Oasis, will be open-sourced to everyone at no charge.

"When we describe what we're building, sometimes we do refer to it as a virtual reality sandbox metaverse, even though that's a mouthful," Retro Ronin co-founder Daniel Mross says in the Kickstarter video. "Within our metaverse, you'll be able to jump between different worlds that are built by different publishers, and different developers, and individuals, and have a completely different gaming experience every single time you play if you want."

Another big hook is that the whole thing is being made as VR-friendly as possible. It's an area the team has some expertise in: For the past two years, CEO Jon Olick has worked as a consultant with Oculus VR. Voxelnauts will be perfectly playable without a VR headset, but the intent is to have it on Oculus Rift and Vive "at a minimum."

The Voxelnauts Kickstarter launched on May 17 and has already raised more than $42,000 on a $200,000 goal, a solid start by any measure. The campaign runs until June 20, and more info (although right now it's mostly just a link to the Kickstarter and a mailing list sign-up form) can be had at voxelnauts.com.