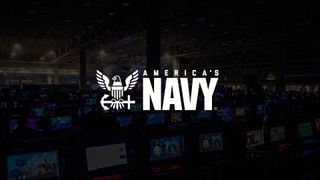 In 2018, the US Army announced that it was putting together its own esports team as part of an effort to boost recruitment numbers, which for some reason had fallen short of annual quotas. (And in case you're curious, yes, it's still operating.) Today the US Navy announced that it too is making a move into esports, not as a participant but as a partner of ESL North America and Dreamhack.

As an Official Festival Partner of Dreamhack Anaheim and Dreamhack Dallas, the Navy will operate an "experiential activation onsite" (which I'm reasonably sure is marketing guffola for a booth) with a LAN setup "where fans can challenge Naval officers and veterans to compete in a variety of game titles." Navy-branded content will also be included in Dreamhack event broadcasts, with an eye toward becoming "an integral part of the esports ecosystem."

"The Navy is excited to partner with DreamHack and ESL as we enter the esports space," US Navy Recruiting Commander Rear Admiral Brendan R. McLane said. "Like the Navy, esports requires a variety of skills and roles, and a strong commitment to continual improvement. Our partnership will help align the US Navy’s passion for competition with esports fans both onsite at DreamHack North American events and through unique online content on ESL channels."

Happy to announce that we are partnering with @AmericasNavy for DreamHack Anaheim.Be sure to stop by their BYOC LAN station onsite where you can 1v1 a Navy Sailor in a game of YOUR choice! For more info:https://t.co/NdI0rvPG7X pic.twitter.com/dO2kILNmvzFebruary 10, 2020

America's Army, which debuted in 2002 (the War on Terror was only a year old, believe it or not), has faced criticism over the years for its obvious positioning as a recruitment tool aimed at underage gamers. I don't know if it's possible to precisely measure the impact it had (and continues to have) on recruitment, and Fraser predicted when the Army announced its esports team that there wouldn't be a sudden surge of gamers lining up to enlist. But advertising works (if it didn't, we wouldn't be buried in the damn things at every turn), and having setups and personnel at live events is an even more powerful tool.

"ESL and DreamHack are constantly looking to engage with fans in new ways, and our partnership with US Navy will allow us to highlight these unique experiences across our media channels to reach viewers," ESL senior vice president of brand partnerships Paul Brewer said. "Our hope is to expose North American esports fans to the Navy’s offerings and to develop shared experiences that help to support our US Armed Forces."

The Navy has as much right to promote itself as Official Festival Co-Partner Monster Energy, I suppose, and it's arguable that the deal isn't fundamentally different from the US Air Force flyovers at mainstream sports events that we all take for granted. But there's an overtness to this effort (the Navy will also be the first-ever "presenting partner" of Dreamhack's BYOC tournament at Anaheim and Dallas, with "officers engaging with BYOC-ers all weekend") that I find uncomfortable. Once military branding and personnel are directly involved, particularly with young gamers, you've moved beyond marching bands and flag-waving into active recruitment.

Dreamhack Anaheim will run February 21-23, while Dreamhack Dallas is scheduled for May 22-24.