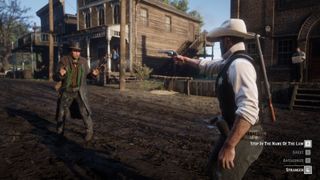 If you're sick of being an outlaw on the run in Red Dead Redemption 2, a solution is on its way. An upcoming mod will let you give up your life of crime and embrace the law, hunting down crooks and interrogating suspicious cowboys.

RDRFR, like its GTA 5 counterpart, aims to overhaul the game, turning it into a cop simulator, but the modders are planning to make it a bit different from its predecessor. The games themselves are very different kinds of sandboxes, and they're hoping to take advantage of the improvements to create a more "intimate and refined" follow-up.

While there probably won't be a dearth of opportunities for stand-offs and shootouts, actually investigating crimes is apparently more of a focus this time, though specifics are still very sparse at the moment. Rockstar's cowboy romp is a much deeper sim than any of its previous games, so hopefully its modding community will be able to take advantage of that.

My favourite cop games are slightly mundane and all about procedure and thoughtful investigation. Police Quest, where you can fail the game just for not taking care of your gun properly, got its claws in me early. It's hard to tell at this very early point, but it does look like RDRFR is going down a similar route; not by being a stickler for the rules, but by taking a more holistic approach to policing, or at the very least not just making you gun down criminals.

In the screenshots, you can see how it uses the game's contextual prompts, giving you new ways to interact with NPCs, like questioning or arresting them, and it looks like you'll be able to partner up with other cops. As well as becoming a frontier lawman, you'll also be able to swap your stetson and six shooter for a proper police uniform and join the force in Saint Dennis.

RDRFR will be out in a few weeks, surprisingly. It won't be finished, but the modders want to get it into the community's hands as quickly as possible. You can also join the Discord to keep track of development and an eye out for the beta. The team also has a Patreon.