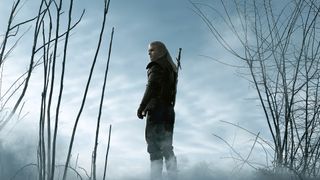 We were delighted to discover that Geralt of Rivia's Netflix debut kicks ass. So we decided to write in-depth recaps/reviews of all eight episodes, from the perspective of a fan of the games. And here they all are.

Less than a minute into the first episode of The Witcher and we witness our hero in full monster-hunting mode, battling a kikimore—a massive, disgusting insect-like creature—in a murky swamp. He briefly loses his silver sword and is pinned underwater by the angry beast, but in a flash he drives the blade through its head, killing it.

A young man presents a girl, the object of his affections, with a daisy. She'd prefer a rose, but they kiss anyway. Then the girl notices the flower is missing, turning to see a figure with a hunched back, dark hair, and striking violet eyes holding it. "You've been spying on us, you creep!" The couple lunge for the strange girl, wrestling her to the ground. Then, a surge of energy—something magical, beyond her control—and she appears, suddenly, on a stone floor, far away.

A boy lies on a bed, bloody claw marks across his chest. "It comes on a full moon," he says. "To feed." A witcher emerges from a dark corner of the room, a wolf medallion around his neck. Only this isn't Geralt—it's another witcher from the School of the Wolf. He says he'll slay the beast for 3,000 oren—up front. The men in the room agree and the boy's father screams with grief as his son succumbs to his wounds.

Episode 4 – Of Banquets, Bastards, and Burials

We rejoin Ciri in the woods, following those eerie, whispering voices. As she moves deeper into the trees, the voices intensify and overlap, chanting her name. Then, suddenly, the snow and withered trees transform into lush greenery, and Ciri sees a glowing light. But before she can get close, she finds herself surrounded by a group of tribal-looking… elves? "If she runs, kill her." a woman, the leader, says to her group in elder. Ciri says her name is Fiona, that she's lost. The woman tells her she's in a place called Brokilon Forest.

Ravens caw in a dusty, dimly lit attic. A man inserts a piece of flesh into a jar of strange liquid. Embalming fluid, perhaps? He places the jar on a shelf with many others containing other body parts, including an ear. He looks at himself in the mirror and smiles, dropping his cloak, admiring his body. Then a shadowy figure appears: it's Cahir, the Nilfgaardian soldier who has been hunting for Ciri. The man in the mirror is a doppler, a kind of shapeshifter who, in their natural form, are hideous, lumpen monsters. Cahir offers the man, who refers to himself as We, a job—to assassinate someone on behalf of Nilfgaard.

We open with Jaskier, who is still tagging along with Geralt, writing a new song. The witcher has been gone for an hour, hunting a monster, and the men who hired him are getting restless. They settle on Geralt being dead and decide to steal his saddlebags, but Jaskier protests. Things are about to turn violent, when a kind-faced old man—Borch Three Jackdaws—steps in, accompanied by two Zerrikanian warriors, Téa and Véa. In a flash, Téa snaps the thief's neck. Then a monster's bloody head lands with a thud next to the group—Geralt has finished his hunt. "I've been looking for you, Geralt of Rivia." says Borch.

Episode 7 – Before a Fall

Geralt crests a hill and watches an impossibly long train of black-clad Nilfgaardian soldiers marching through the Amell Pass—which, as we learned in episode one, leads directly to Cintra. We're witnessing the beginnings of the invasion. We also check in with Ciri, long after the invasion, looking for passage to Skellige in a village. A kindly woman offers to give her a roof over head head and some food; Ciri repays her by stealing one of her horses and galloping away.

We rejoin Geralt in Cintra, having just run his sword through a prophecy-spouting Nilfgaardian soldier. He realises he's in Ciri's room and looks through her belongings—a storybook,  a dress, a set of knucklebones—and we hear an echo of his promise to Calanthe from episode seven: "I will take her, protect her, and bring her back unharmed, I promise you that." Later, outside the city walls, Geralt bumps into a man he mistakes for a graverobber. He's a merchant, Yurga, and he's giving the dead a proper burial, not robbing them.