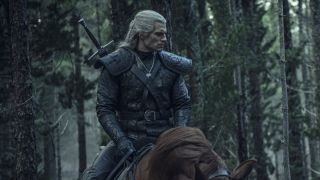 Less than a minute into the first episode of The Witcher and we witness our hero in full monster-hunting mode, battling a kikimore—a massive, disgusting insect-like creature—in a murky swamp. He briefly loses his silver sword and is pinned underwater by the angry beast, but in a flash he drives the blade through its head, killing it.

It's a thrilling, hectic introduction to the series, and from the outset one thing is abundantly clear: Henry Cavill is going to be great as Geralt of Rivia. Once the monster has fallen we're treated to a close-up of the witcher's face; eyes black, skin pallid, veins throbbing. Evidence of poisoning caused by swigging potions, and our first clue that the people making this show care about the finer details.

Geralt rides into the nearby town of Blaviken, looking for the alderman—the person who put up the bounty for the monster. As he enters a tavern the band stops playing and the patrons glare accusingly. "We don't want your kind here, witcher." one snarls. This establishes an unfortunate fact of life for our hero: people don't much like witchers, despite the important public service they provide.

A fight almost breaks out, but a woman, Renfri, steps in. The men back down and the pair speak briefly at the bar, a flutter of sexual tension drifting through the air as she heroically chugs down a couple of flagons of ale. There's bad news for Geralt, however—the bounty was for a graveir (another type of monster), not a kikimore.

A local girl, Marilka, promises Geralt that Stregobor, a wizard who lives in town, will buy the monster's corpse and he finds himself in the mage's tower—the interior of which has been transformed, with illusory magic, into an idyllic garden tended by young, naked women. "It helps time pass more delightfully." he tells the unimpressed witcher.

Geralt suspects, correctly, that the misunderstanding with the kikimore was actually a ruse to lure him to Stregobor's tower. The wizard has a job for Geralt, he says. A monster to slay, but not the kind he's used to. "The worst kind," he says with a sinister gleam in his eye. "The human kind. Its name is Renfri." Yes, the woman Geralt met earlier, whose talent for downing pints got him all hot under the jerkin.

Before we learn more, we cut to an evocative establishing shot of the walled city of Cintra. On the streets a girl plays a game of knucklebones with some other commoners, but is whisked away by a trio of knights and revealed to be none other than Princess Cirilla. Ciri stands in the throne room, now clad in the finery of a Princess, and watches her grandmother, Queen Calanthe, honour a parade of loyal soldiers—but it's clear she finds the life of a monarch rather dull.

Back in Blaviken, Stregobor tells a sceptical Geralt about the so-called Curse of the Black Sun. Renfri, he explains, was born under an eclipse and is cursed as a result, being more monster than human—and immune to magic as a result of "internal mutations." According to the wizard she's the last of the women of Lilit—the demon goddess of the night—and must be destroyed. But Geralt is unconvinced.

Excuse the brief aside, but I feel it's important to say just how good Henry Cavill's Geralt voice is. The actor has not only captured the dry cynicism and directness of the character, but that important undercurrent of warmth and humour too. Doug Cockle, Geralt's voice in the Witcher videogames, will always be my Geralt of Rivia—but Cavill has done a fine job here. And I'm glad to say his wig looks a lot better than it did in those early test shots, which looked a bit like a bad Legolas cosplay. Cavill is perfectly cast here.

Back in Cintra, at a lavish feast being held in the castle, Calanthe receives news that the Nilfgaardian Empire is marching on the city. As Ciri dances, King Eist wonders why the Queen isn't sharing the news with her. "It may be her last feast for a while," she replies gravely, letting her granddaughter enjoy one last moment of innocence. It's a touching scene, played brilliantly by actor Jodhi May.

In a beautiful, sun-dappled forest on the outskirts of Blaviken, Geralt gathers herbs to make one of those potions he's so fond of. Renfri appears out of the trees, telling him that she was a Princess once, but Stregobor's men raped her and cast her out of her kingdom, forcing her into a life of desperate survival. She's in Blaviken seeking revenge and that's the real reason he wants her dead.

Geralt's neutrality is an important part of his character, and makes having to pick sides in Stregobor and Renfri's rivalry particularly troubling for him. In this episode he quotes his old friend, mentor, and fellow witcher, Vesemir: "Witchers shouldn't play at being white knights." Geralt tells Renfri to move on with her life, to drop her quest for vengeance, and she seems to agree. Then that bubble of sexual tension finally bursts and they spend the night together.

On the Marnadal Stairs, a pass in the Amell mountains leading towards Cintra, a fierce battle erupts between the Cintrans and the Nilfgaardian invaders—with Queen Calanthe and King Eist fighting on the frontlines. This is our first big battle in the series and it's unflinching in its brutality, shot in a shaky, intimate documentary style. In the thick of the chaos an arrow suddenly slams into the King's eye, killing him instantly. It's a shocking and coldly unceremonious death.

Calanthe traces the source of the arrow to a lone black rider in the distance, calmly watching the battle unfold. We'll see more of him later. In the castle Ciri paces, worried about the battle. She asks Mousesack, a druid and loyal advisor to the royal family, if her grandmother will be alright. After a loaded silence: "You will be alright, Princess," he says, avoiding a direct answer. "You are her blood."

Back on the battlefield, more Nilfgaardian soldiers arrive, flying the Empire's sinister black-and-gold banner. The battle is lost and it's not long before the invaders reach Cintra and conquer it—that is, everywhere but the castle, which a badly wounded Calanthe has managed to escape to. Mousesack casts a magical barrier over the walls, keeping the Nilfgaardians out—for now.

Alas, the barrier fails. Ciri weeps as her dying grandmother admits defeat, preparing to concede to the Nilfgaardians. Then the Queen tells Ciri to find Geralt of Rivia. "He is your destiny," she says. And to a young knight, Lazlo, who is charged with protecting the Princess, she adds that Ciri's safety is of the utmost importance—because "the world depends on it." It seems destiny has something in store for her.

Ciri is whisked away by Mousesack and Lazlo, escaping through a warren of tunnels built deep under the castle. During the escape Mousesack sacrifices himself to protect Ciri as the black rider who killed the King earlier approaches. A side note: the knight, Cahir, is played by Eamon Farren, who recently appeared in the third season of Twin Peaks as the utterly terrifying Richard Horne.

As Lazlo rides away with Ciri, she asks him: "I've been protected my whole life. Why?" But the knight gets an arrow in the throat, courtesy of Cahir, before he can answer. Then we cut back to Blaviken where Renfri seems to have had second thoughts about Geralt's proposal. He finds the town crawling with the thugs from the pub—actually Renfri's men—and a fight ensues, giving us another look at Geralt in combat.

I was on-board with Cavill as Geralt straight away, but this is where I was certain he was born to play the role. This is a brilliantly choreographed fight scene—and a surprisingly gruesome one too. Geralt carves through Renfri's thugs, finishing the last man by theatrically lopping his head off. Then Renfri emerges from the shadows, holding Marilka hostage, saying she'll kill everyone in Blaviken until Stregobor comes down from his tower. Seems she still has revenge on her mind.

As Cintra burns, Cahir rides through the countryside on horseback with Ciri strapped to his horse. She looks back at her city in horror, now wreathed in flame, and screams—a shrill, ear-piercing shriek that, somehow, causes the horse to panic and kick both of them off. She screams again, louder than before, shaking the earth, which opens up a crumbling chasm in the ground between her and her captor—giving her a chance to flee. Cahir looks as bewildered as he is frustrated, unsure of what he just witnessed. Ciri escapes into the woods.

In Blaviken, Geralt and Renfri fight when it becomes clear to the witcher that she's willing to slaughter the entire town. The duel is fast and savage; another example of the show's brilliant, brutal choreography. "They created me just as they created you," Renfri says. "We're not so different." Geralt resists several opportunities to kill her, but she eventually falls to his blade. "The girl in the woods will be with you always," she says as she dies. "She is your destiny."

The threat gone, Stregobor appears, looking at the trail of bloody bodies left in Geralt's wake. He tells Marilka that he intends to take Renfri's body to his tower for an autopsy, but the witcher puts a sword to his throat, urging him to leave her alone. I'm not sure what's going on in Geralt's head here, but I think a part of him believes what Renfri said about Stregobor. But before he can act, the villagers turn on him. "You're a beast!" one shouts. Others throw stones.

Stregobor smiles to himself as Geralt—the Butcher of Blaviken—leaves town clutching Renfri's brooch. We hear her voice, repeating that enigmatic line from earlier: "The girl in the woods will be with you always." Then a cut to a shot of Ciri, terrified, fleeing through the woods. "She is your destiny."

And so ends the first episode of The Witcher, one of the best openings to a series I've seen in a while. It looks great, it's wonderfully cast, the action is beautifully choreographed, and Henry Cavill is note-perfect as Geralt. A promising start.

• How cool is that black Nilfgaardian armour? Compared to the clunky plate of the Cintran soldiers, it almost looks organic—like medieval armour as imagined by H.R. Geiger.

• At the feast in Cintra, Eist tells Calanthe about seeing the Wraiths of Mörhogg. This is the Skelligan name for the Wild Hunt, the frosty spectres hunting for Ciri in The Witcher 3.

• As he fights his way through Renfri's gang in Blaviken, Geralt knocks a pair of them back using a blast of kinetic magic—which fans of the Witcher games will recognise as the Aard sign.

• I love that ominous shot of the black mass of Nilfgaardian soldiers cresting the hill, silhouetted against the sky. Eist and Calanthe's faces drop, knowing deep down that Cintra is doomed.