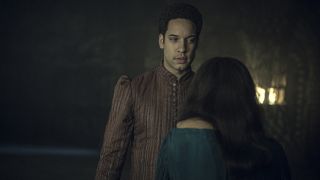 A young man presents a girl, the object of his affections, with a daisy. She'd prefer a rose, but they kiss anyway. Then the girl notices the flower is missing, turning to see a figure with a hunched back, dark hair, and striking violet eyes holding it. "You've been spying on us, you creep!" The couple lunge for the strange girl, wrestling her to the ground. Then, a surge of energy—something magical, beyond her control—and she appears, suddenly, on a stone floor, far away.

This is our introduction to Yennefer, who is very different from the beautiful, powerful woman we met in the Witcher games. She studies her new surroundings: a stone chamber lined with skulls. "It looks like you portalled in." says a man, Istredd, who is shocked to find her there. He tells her that "she" will be coming for her now; that opening this portal painted a target on her back. Another portal opens up and Yennefer escapes into it, back to her village.

A woman arrives at Yennefer's home and offers to buy her for four marks—which is where this episode gets its name. Her father agrees, ignoring the protests of her mother. Moments earlier he said a pig would cost ten marks, giving you a sense of just how little he values his deformed daughter. "The woman's a witch," warns the mother. "You know what they will do." But it falls on deaf ears.

Anya Chalotra is superb as Yennefer, portraying her with a quiet fragility—but also a dormant inner strength. We cut to her in the sorceress's castle, in which she seems to be a prisoner. She looks at herself in a dirty mirror and weeps, angrily smashing it with her fist. Then she picks up one of the broken shards and raises it to her wrist, ready to end the suffering on her own terms. It's a sombre, emotional beginning to another fantastic episode of The Witcher.

We rejoin Ciri, fleeing through the woods. Distant voices call out her name; Nilfgaardian soldiers attempting to recapture her. She covers her hair in mud, perhaps in an attempt to disguise herself. Hungry, she plucks a berry from a bush, only to have it struck from her hand by some unseen projectile. A boy emerges from the trees, wordlessly warning her not to eat the berries, which are apparently poisonous.

They make a fire, cooking and eating a couple of rats. Ciri is a long way from the feasts of the Cintran court now. She tells the mute boy about how she's running from a man "with a big bird on his head", referencing Cahir, her captor from the first episode. Then she spots Cintran flags ahead—her people—and is delighted. But the boy, who she has decided to call Rat Boy (charming), vanishes at the sight of them.

Now we're in Posada, in a tavern being terrorised by a lute-twanging bard. The patrons pelt him with food, which he picks up and slips into his pocket. This life clearly isn't paying off for him. Then he notices a white-haired figure drinking alone in the corner: Geralt of Rivia. Geralt criticises the bard's song, saying the creatures he sings about aren't real. As the witcher leaves, a man approaches him. A devil has been stealing his grain, he says. He'll pay Geralt to kill it.

The man offers 100 ducat, but Geralt convinces him to pay 150. If you've played the Witcher games you'll be familiar with this—haggling to increase the price of a bounty. It's nice to see this detail make it into the show. Geralt sets off to hunt the devil, and the bard—who you've probably guessed by now is Dandelion, or Jaskier as he's known here—decides to tag along, much to his dismay.

Jaskier makes the mistake of referring to Geralt as the Butcher of Blaviken, an unfortunate nickname whose provenance we learned last episode. He responds by punching the bard in the gut. Undeterred, he promises to write songs about Geralt's adventures that will make people forget about his past. "All the North would be too busy singing the tales of Geralt of Rivia, the White Wolf... or something."

We're in Aretuza now, a magical academy for girls run by a woman called Tissaia de Vries. We see a vast stone fortress cut into a rocky coastline, with a long rope bridge connecting it to a tall, ominous tower. This castle is where Yennefer is being held; Tissaia being, it transpires, the witch who bought her. "You should have let me die." says Yennefer as the camera reveals her bloody, bandaged wrists.

Yennefer is in a greenhouse with other girls whom Tissaia says have an "aptitude for channelling chaos"—chaos being a powerful source of magic in the world of The Witcher. The other girls perform a simple trick, making a small rock float in the air—but Yennefer can't do it. When the rocks rise, nearby flowers wither and die. "This is the balance," says Tissaia, describing magic as "organising chaos."

Yennefer still can't move the rock and storms out. She crosses the bridge to the tower, which is revealed to be the stone chamber she appeared in earlier. "You were right," she tells Istredd, who is once again startled to see her. "She found me." We learn later that this is Tor Lara, the Tower of the Gull, which Tissaia calls "the most potent place on the continent, off-limits except to the Brotherhood of Sorcerers."

Geralt and Jaskier travel deeper into Dol Blathanna, a region once ruled by the elves, until the witcher finally tracks the 'devil' down—which is actually a sylvan, a rare satyr-like species. Geralt and the sylvan, whose name is Torque, engage in a brief scrap before the witcher pins him to the ground, holding a sword to his neck. Realising the creature is intelligent, Geralt refuses to kill him. "I won't kill you," he says. "But you can't stay here." Torque replies: "Neither can you."

In the woods, Ciri finds herself in a camp of Cintran refugees and is taken in by a family who are oblivious to her true identity. She holds her tongue as they blame her grandmother, Calanthe, for the invasion. Back at the Tower of the Gull, a storm rages and Tissaia instructs the girls to capture lightning in a bottle. Yennefer fails and in her fury launches a bolt at one of the other students. Tissaia catches it and throws it to safety, warning Yennefer that her job is controlling chaos, not becoming it. "There are mages who contain their emotions," she says. "And then there are mages like us who are consumed by them."

Geralt wakes up, having been knocked out cold. He discovers that he and Jaskier are tied together, prisoners of a group of rebel elves. They meet Filavandrel, the King of the Elves ("not by choice") who dumps some exposition on the pair about the Great Cleansing—when humans learned magic from the elves then used it against them, driving them from their homes. Filavandrel prepares to execute Geralt, but Torque—whose theft of the grain in Posada was to feed his elven allies—steps in, telling the King how Geralt had spared his life. It works.

Yennefer meets secretly with Istredd in the Tower of the Gull. He tells her about how humans took the elves' knowledge of magic and slaughtered them in return. The skulls lining the chamber are the skulls of dead elves, he says. Yennefer confides in Istredd, telling him that her father—her real father—was half-elf, and died in the Great Cleansing. "His blood is why I'm cursed with a twisted spine," she says. "That's why I'm only worth four marks." They share a kiss.

In Aretuza a familiar face appears. Stregobor, the wizard who cast Geralt from Blaviken in the first episode, talks to Istredd, who is standing to attention like a loyal soldier. It's clear who is the authority here. "You've been working on her for months," the mage says. Istredd tells Stregobor that Yennefer's father was half-elf; knowledge Stregobor seems to have some use for. It's a heartbreaking revelation, that the only person who has shown Yennefer any kindness is using her.

But is Yennefer playing Istredd too? During their meeting he gives her a flower called a feainnewedd, which seems to have some magical properties related to portals. Yennefer opens one up when she takes the flower, and Istredd is surprised she manages to do so on her first attempt. Later we see Yennefer giving the feainnewedd to Tissaia, who tells her it was a test to see if she could control her emotions. "Does this mean I get to ascend?" she asks, as if this was her due reward.

Later in the castle, Yennefer watches Tissaia turn three of the girls into wriggling yellow eels. The witch then asks her to push them into a pool of water beneath them. Yennefer refuses at first, but eventually gives in. As the eels slip into the water, Aretuza begins to glow and pulse with magical energy. Yennefer peers into the now-glowing water, watching the eels swim, and a smile creeps across Tissaia's face.

Back at the refugee camp the Nilfgaardians attack—led by bird-headed, black-clad Cahir—but Ciri manages to escape thanks to our old friend Rat Boy, who is revealed to be an elf called Dara. In Dol Blathanna Geralt and Jaskier ride away, unscathed, from the elven stronghold. It's revealed that Geralt gave the coin he earned for slaying the 'devil' to Torque, suggesting some sympathy towards Filavandrel's plight—or maybe it was just a generous reward for saving his neck.

The pair ride into the sunset as Jaskier composes a new song: "When a humble bard / Graced a ride along  / With Geralt of Rivia / Along came this song / From when the White Wolf fought a silver-tongued devil." This could be the start of a beautiful friendship.

This was a slightly more muddled episode than the first, heavier on exposition than it perhaps needed to be. But two episodes in, The Witcher is still a superb adaptation. Cavill continues to be great as Geralt, but the real star of this episode is Anya Chalotra as Yennefer, who I can't wait to see more of as she grows into the sorceress we know and love.

• If you're wondering why Dandelion, one of Geralt's closest allies in the games, is named Jaskier in the show; that's his name in the Witcher books, which means 'buttercup' in Polish.

• The events in Blaviken in the first episode still seem to be playing on Geralt's mind. "No matter what you do, you'll come out bloody and hating yourself," he tells Filavandrel. "Trust me."

• In the games Geralt frequently expresses a dislike of portals, which Yennefer frequently conjures up for him. In this episode we see the first glimpses of her natural portal-making talents.

• There's some great fantasy scenery in this episode, particularly the dramatic, rain-lashed fortress of Aretuza, and Posada, a ramshackle village built around a jagged spire of rock.