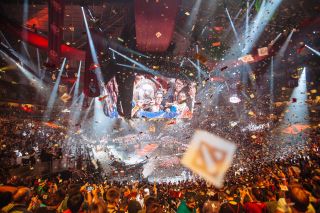 Time passes quickly in a packed esports season. It’s already been nearly two months since the Kiev Major, and if you blinked, you likely missed several important tournaments on the road to The International 2017. Now, the TI7 invites have been announced, with six teams grabbing the the honors: OG, Virtus.Pro, Evil Geniuses, Team Liquid, Newbee and Invictus Gaming.

Here’s a recap of what’s taken place so far—and what’s to come before the final fight for the Aegis this summer.

A follow-up to the wildly successful 2016 event ESL One Manila, the esports event giant teamed up with local production company Mineski Production Team to bring Dota 2 back to the capital of the Philippines again. Held once again at the Mall Of Asia’s arena, the tournament boasted a $250 thousand prize pool, with $125 thousand going to the top team.

Teams present were decidedly some of the top in the world, with OG, Newbee, and EG among the ranks. North American team NP had a surprisingly strong presence as well, taking a respectable third. Ultimately, though, EG and Newbee took the respective first and second place spots at the tournament before going their own ways to new, separate events.

The Taiwanese tournament felt small in scale and presence compared to other events, but make no mistake: the event had a $100k prize pool and strong teams including Newbee and NP. Still, at first glance, the absence of major tier one teams due to the upcoming Epicenter in Moscow can make it feel much less grand in the larger scheme of things. If it counts for anything, NP took a one-year ban from Dreamleague in order to be present.

The aforementioned teams faced off in the finals, and Newbee went home with the prize. The fact that NP came so close, though, could mean that North American competition may get heated as the season goes on. Teams such as the also-present Digital Chaos will have a lot to work towards this season.

The Russian tournament was well-received after their debut in 2016, and now they’ve returned for another year. This time, though, they’ve ditched the double-elimination format for a riskier one: ten teams invited, four eliminated in group stages, and six proceed to single-elimination brackets with seeding based on group stage performance. If it sounds confusing, you’re certainly not alone, but it likely plays more fairly and meaningfully than Valve’s current all-in single-elimination format.

Teams present were some of the top performers in Kiev, including OG, EG, Team Secret and iG. Basically, the competition shaped up to be tough. As one of the last premier tournaments before the TI7 invites, each team fought tooth-and-nail for not just the prize, but Valve’s attention as well.

At the end, Team Liquid took a somewhat-surprising but well-deserved win, given their inconsistently strong performance the rest of the season. As the other finalist, Evil Geniuses certainly performed well, though, holding onto their reputation as the top North American team.

The darling biannual tournament of Dota 2, hosted by grassroots studio Beyond The Summit, returns for its seventh iteration. It’s held in the house owned by BTS and features quirks such as “couch casting” (which is exactly what it sounds like), goofy features and a family vibe. It sounds odd, but the tournament itself is extremely serious, as it shows off the top teams in the world. With a $100k prize pool, teams have reason to take it seriously.

More importantly, it’s one of the two tournaments, along with Galaxy Battles, that sits safely before the estimated dates of the TI7 invites. Virtus.Pro had the opportunity to reaffirm their worth as the premier CIS team, as Team Secret had to for western Europe. In the end, VP took the crown with a massive range of unique heroes: 81 out of 85 picks were unique, and they got the invite.

Also having taken place this weekend was the first iteration of Galaxy Battles, a Chinese tournament given a blessing by the National Electronic Sports Open, a major Chinese circuit. While it’s not as renown as The Summit, it still has a respectable mix of teams that can make for an engaging event.

It’s worth more in prize pool than The Summit, with $150k total, and again, like The Summit, it’s one of the last tournaments before invites may go out. This time, Newbee proved they were the top Chinese team in Dota, and they got the invite.

Here, then, is the checkpoint and a turning point in the midst of all the chaos. Already, the dates for the qualifiers themselves have been announced. Now, teams that aren’t directly invited to the major event will have to face off in order to cinch the last of the spots, whether through the open qualifiers or an invite to the regional qualifiers.

From these qualifiers, though, it doesn’t end before the Seattle main event. A few more events between now and then can signal to fans who will perform well at The International, if the teams choose to play instead of train.

If your team wants to give a shot at the Aegis, open qualifier signups are open as of the time of writing until the start of the bracket check-in on June 22.

Held by the Chinese media company, the Mars Dota 2 League already has some of the top talent lined up, including OG, EG and the two arguably strongest Chinese teams right now, Newbee and iG. Originally to be held late April, the sudden announcement of the Kiev Major meant the event had to be rescheduled to its new time. That means, though, that fans can enjoy another event before TI7 kicks off.

This event will likely set the stage for the “east versus west” narrative that takes place each TI. With the flip between China and European/American countries taking the Aegis, fans are eager to see if China can break the streak.

One of the biggest South American tournaments in recent years (if ever), The Final Match brings together the top local talent, including Kiev Major underdogs SG E-sports, plus international invites, the European team Alliance and Korea’s MVP HOT6ix. The region is usually pretty ignored for its perceived poor play, though after SG’s run in Kiev, many speculate it’s due to the high lag that team experience in cross-continental American gameplay. A LAN of this size should be entertaining and a great preview of what’s to come from the South American qualified team.

DreamLeague is one of the longest-standing esports leagues out there, with Dota 2 held as a staple. This time, though, instead of its usual European setting, the event has been brought to America. While there are typically visa issues when it comes to American events, the event has offered TI7 training space for any well-known team planning to attend, meaning teams have a reason to obtain their visas early.

The Atlanta event already has some pretty big names lined up, including Team Secret and Epicenter winners Team Liquid. Rounding out the event are Vega Squadron and Planet Odd, each of whom won through the event’s online circuit.