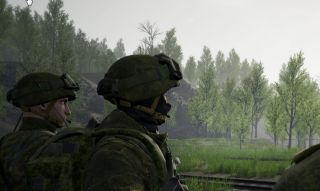 Large-scale tactical shooter Squad hit Early Access today, although that choreographed trailer shows off less about the game than it does the United States' defence budget. Squad is from some of the developers behind the Battlefield 2 mod Project Reality, a total overhaul that requires teams to cooperate when faced with vast maps and the brutal realities of proper bullet physics. Squad is pretty much that but newer and shinier—the middle ground between Battlefield and Arma.

This was a Kickstarter baby, raising $435,000 CAD of a requested $184,000, but with the honest caveat that it will take about $3 million to realise the full vision. Offworld Industries has put forward a tentative finish date of late 2016.

The final product will feature 50v50 strategic battles that preclude lone-wolfing, with vehicles to be added down the line. Going on Steam reviews, however, the condition of the game as it stands is impressive. Base-building and fortification systems are already in place, but the feature that stands out to me is the integrated positional VoIP, one of many pains the developer looks to have taken to force team play.

The downside? This is an unfinished game that is asking for £30/$40, but as it's currently sitting in the Steam top seller spot, you may be in safe hands. I feel a review coming on!