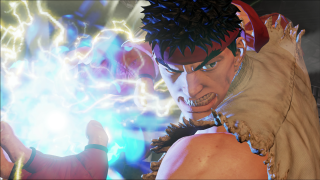 What with all that competitive punching each other in the face, it's easy to forget that Street Fighter has a a long, winding and unresolved story. Individual Street Fighters tend to tie up loose ends in the arcs of particular characters, but the series has struggled to weave the threads together, particularly with Street Fighter 4 taking place before 3 chronologically. The standard Arcade mode stories are returning in Street Fighter 5 but will serve as an introduction to the full 'cinematic' story expansion arriving in June, which promises to knit the games together once and for all.

Patching the story in after the fact tells us a lot about where Capcom's priorities lie, and rightly so—Street Fighter is about street fighting after all—but it is peculiar to have the narrative plastered on at a later date. Still, free is free, right?