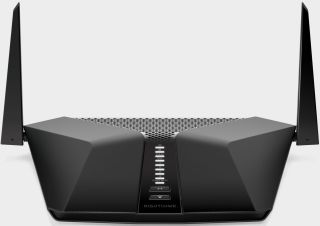 Netgear's Nighthawk AX4 router is the best gaming router in Wi-Fi 6 territory for buyers on a budget, and that's before factoring in today's discount. Over at Walmart, you can adopt this alien-looking network contraption for just $99.

That's half off its list price, and though it doesn't usually sell for $199, you're still saving $50 or more compared to what it typically sells for (it's just a few pennies shy of $150 on Amazon right now, and sold for around $160 earlier this month). Don't be fooled by the comparatively low price, though, this is a good router.

We wrote about why gamers should care about Wi-Fi 6, but the short explanation is that Wi-Fi 6 (otherwise known as 802.11ax) is the newest standard in wireless networking. The protocol is better equipped to handle multiple devices on a network. This is important because practically every gadget these days can connect to the internet—smartphones, PCs, tablets, TVs, game consoles, set-top boxes, smart speakers, and the list goes on.

The caveat is that a Wi-Fi 6 adapter is needed to take full advantage of its capabilities. Most of your devices probably are probably based on an older specification. However, Wi-Fi 6 is backwards compatible, so you can upgrade your router and be in great shape as you pick up newer gadgets.

Netgear's Nighthawk range has traditionally offered fast performance with excellent range. I have not tested this specific model, though I have evaluated its bigger sibling, the AX8, and have used that as my daily driver. I've also used plenty of Nighthawk models in the past and have no reservation in recommending one, especially at this price.