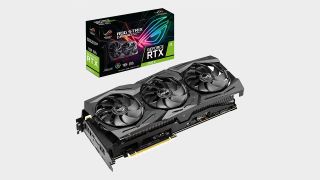 Saving a few hundred bucks on a top-tier graphics card is no joke, especially on the best consumer graphics card on the market, namely the RTX 2080 Ti. Right now, on Amazon, you can pick up an Asus ROG Strix Geforce RTX 2080 Ti 11GB for $999.99, the lowest price that card has been from it's normal $1,259 retail price. Whether you're building the most extreme PC money can buy or simply upgrading your current gaming PC for 4K gaming, this GPU does not mess around.

The Asus ROG Strix GeForce RTX 2080 Ti Overclocked 11GB graphics card is a beast in the performance department. It also comes with GPU Tweak II, software that will allow you uh, tweak and monitor all of your GPU settings if overclocking is your thing. In the GPU hierarchy, the 2080 Ti is the top dog mostly because it'll give you the highest framerate for 1440p or 4K gaming on a single card.

Today's been pretty good for graphic card deals in general with a reasonable price on a hybrid cooling RTX 2080 (the UK only). While nowhere near fast as the 2080 Ti, it's still a great card that seldom gets discounted.