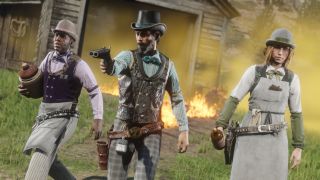 I'm not the most dedicated cowboy in Red Dead Online—Buffalo Bill supposedly killed over 4,000 bison and I've personally killed, what, three? (And felt pretty terrible about it, too.) Maybe 3-4 times a week I'll login and play for an hour or two, just enough time to visit my moonshine shack, do a bit of deer and hog hunting for the trader profession, use my metal detector to find some buried treasure, and maybe get into a scrap with another player in which we comically punch each other's hats off.

But even considering my short sessions, I still have to quit and rejoin at least once per night, and often more than that, due to a number of bugs, glitches, and issues that continue to appear in Red Dead Online. Sometimes it's an infinite loading screen when beginning a story mission or a moonshine delivery. Sometimes it's just an abrupt disconnect from the server. Sometimes everything just stops working all at once—I'll suddenly discover I can no longer draw a weapon, interact with workbenches in my camp, climb onto my horse, or even punch someone's hat off.

On average, I estimate I have to restart Red Dead Online about once an hour due to glitches. And much as I enjoy playing RDO, that's starting to feel like an awful lot.

The player camp seems to be the most problematic element in RDO, and it being problematic is even more problematic because it's such a central part of the game, used for crafting and trading and collecting your mail and obsessing endlessly over which belt buckle truly expresses your inner cowboy.

At times my camp won't spawn in no matter how many times I try to set up its location. A few times I've arrived at my camp to only find a campfire and nothing else—no sign of my other workstations. Sometimes fast-traveling to it leaves me in infinite loading screen limbo—maybe because it's in the process of trying to spawn. And other times it's there one minute and just plan gone the next, as above. (Great job keeping an eye on the camp, Cripps. What do I pay you for again?) It's frustrating when this essential location becomes a chore to access, or straight-up impossible. If I'm just playing for an hour, I don't want to spend half that time just trying to materialize my rickety home base.

And there are plenty of other weird glitches. Sometimes an icon from a collector's map doesn't actually lead to an item. Once I rode all the way up to Adler Ranch, a snowy, desolate spot on the northern fringes of the map, only to discover the treasure icon I was headed for had suddenly moved to the southern area of the map while I was riding. Sometimes the metal detector straight-up doesn't work, despite the map pointing me to the location where there should be detectable treasure.

In just a couple hours of playtime, there's a lot that can stop working. Bounty boards are inaccessible at times. The other night my horse got stuck in place and I couldn't mount him until I'd run a long way away and re-summoned him. That same night, while trying to dig up a collectible coin, my character suddenly did an about-face, shuffled into a fence, and got stuck there, walking in place like he was trapped on an Old West treadmill. From time to time the moonshine shack won't let me enter it, and at other times, I walk in and it's empty: no Maggie (the office manager), no Frenchy (the shine cook who gives you a long safety briefing before every delivery, also I don't know his actual name), and no AI visitors in the bar.

Most of these issues are solved by a restart, and a few by sitting there waiting for several minutes. But considering how irritating it is to have to do this at least once, if not multiple times during my short sessions, I can't imagine how frustrating it must be for players who really invest a lot of their time and energy, play in groups, and grind out missions and challenges. The more times I have to restart, the less chance I'm willing to put up with yet another restart. I'm getting close to the point where I'm thinking of quitting altogether. (Running into an occasional Red Dead Online hacker doesn't help either.)

I'm not angry about the glitches, really, it's just that I really enjoy my brief little nighttime sessions of puttering around in RDO, and having my fun interrupted so often is really wearing me down. I know it takes time to figure out why bugs and glitches happen, and more time to fix them and test them and tweak the fixes and then finally roll them out to players. But in the meantime, I'm having less and less fun each time I play, and I'm feeling more and more frustration. If things don't improve soon, I won't be getting my hat punched off, I'll be hanging it up for good.