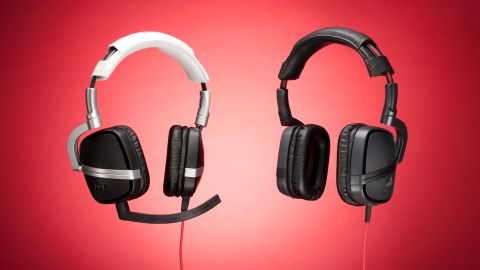 The Polk Audio Striker Pro is a solid, street-friendly stereo headset that can pull double (or triple) duty with an array of connectors.

Headsets can be incredibly personal devices, especially when you use them in places besides the computer chair. Polk Audio’s Striker Pro is a headset that we found ourselves wearing a lot, at—and away from—the keyboard.

The first thing to know about the Striker Pro P1 is that it’s a stereo headset. There’s no 7.1 USB surround here (like the HyperX Cloud II), or the ability to jack into your sound card’s 7.1 3.5mm jacks (like the Roccat Kave). Instead, the Striker Pro P1 comes with three different cables. The PC cable has mic and stereo 3.5mm jacks, and is longer than the other cables. The mobile cable comes with a mic/stereo combined jack with an inline mic and remote. The last cable is for console controllers.

When we picked up the P1, we noticed how deceivingly heavy these little cans are. For many gamers, a heavy headset is a no-go, so that is something to consider. For us however, the weight wasn’t necessarily a bad thing.

The nearly all-metal design feels durable as hell. We’ve transported this headset in a backpack without any protection, and they haven’t broken or looked too much worse for wear. (That is, save a few scratches that may be visible in photos; sorry about that.) These are headphones you can really put through the ringer and use every day, and there’s a lot to be said for that.

The metal construction includes the headband, which applies plenty of pressure to keep the cans in place. The metal headband also doesn’t make us cringe when we flex it, like plastic headbands often do.

The leatherette ear cup padding is nice and provides reasonable isolation. The sound comes in clear and is comparable to a pair of AKGs DJ headphones (K-181DJ) we have.

The lack of surround makes it hard to see this headset competing with top-tier gaming headset in first-person shooters, RPGs, and simulators. However, as a stereo headset, they’ll be just fine for MOBAs and strategy titles, and gamers who aren’t picky about surround.

The Striker Pro P1 also has a detachable boom mic. We like detachable mics, since it lets us use the headset in “everyday” places like walking down the street, in the coffee shop, or on mass transit, without looking odd. Points to Polk for making these stylish for the street.

We also like the fact the mic is detachable because we’re not big fans of the mic. Positioning the arm of the mic feels like posing one of Gumby’s arms or legs. We felt this was odd, and we kept wondering to ourselves if the mic would stay in place once we put it where we wanted. For headphones that cost $150, we'd like a better mic arm.

At the end of the day, the Striker Pro is a solid headset that qualifies as a solid go-to headset that you can use at the desk, in the living room, and on the street. We like the versatility, even if it comes at the price of surround features. If you have to get just one headset to perform multiple roles, this headset will serve you well. However, if you want a more full-featured surround experience, this isn't the headset you're after.

The Polk Audio Striker Pro is a solid, street-friendly stereo headset that can pull double (or triple) duty with an array of connectors.

Alex first built a PC so he could play Quake III Arena as a young lad, and he's been building desktop PCs ever since. A Marine vet with a background in computer science, Alex is into FOSS and Linux, and dabbles in the areas of security and encryption. When he's not looking up console Linux commands or enjoying a dose of Windows 10-induced schadenfreude, he plays with fire in his spare time.
See comments