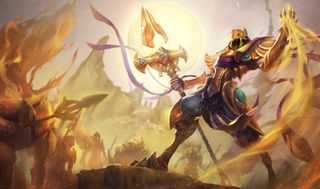 Market research firm Superdata says the digital games market in 2015 was worth $61 billion across all platforms, an increase of eight percent over 2014. Digital sales on consoles saw the greatest year-over-year jump at 34 percent, but the big dog in the digital pack was none other than League of Legends, with 2015 revenues of $1.6 billion dollars.

Number two on the overall list is the mobile game Clash of Clans, which pulled in a very impressive $1.3 billion over the year. But the PC rounds out the top five with Smilegate's Crossfire (which will soon be brought to the West by Starbreeze) at $1.1 billion, Dungeon Fighter Online from Neople at $1.05 billion, and the ancient, immortal World of Warcraft, which in its 11th year of existence earned $814 million dollars.

Perhaps unexpectedly, given the rise of mobile gaming, the report also states that the top ten PC games actually pull in more money than the top ten mobile games, with $6.3 billion earned on PC compared to $6.1 billion on mobile. The overall gap in market value is even wider.

The full list of top-grossing PC games in 2015, in millions: