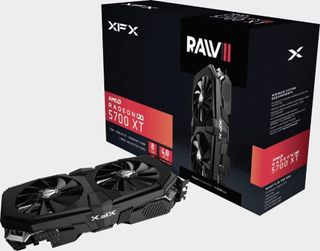 After the last-minute firmware update to the RX 5600 XT, we're a bit less enamored with the newcomer. Toss in deals like this XFX RX 5700 XT and you get potentially 20-25 percent better performance for a similar increase in price. The RX 5700 XT remains one of the best graphics cards for gaming.

XFX's Radeon RX 5700 XT Raw II is on sale at Best Buy for $369.99, which is $20 below its list price. Save for an open box ASRock model on Newegg ($360.99), it's cheaper than every other model listed. That's before factoring in mail-in-rebates. If you're willing to mess with those, XFX's Radeon RX 5700 XT Thicc II is the same price on Newegg. But why jump through that hoop if you don't have to? Answer: you shouldn't.

In overall performance, RX 5700 XT cards trade blows with Nvidia's GeForce RTX 2070, and trails the newer RTX 2070 Super by about 6 percent. Considering the price gap, however, AMD's fastest Navi 10 cards, ie the RX 5700 XT, are a great bargain. You won't get ray tracing support (unless AMD gets around to releasing DXR-enabled drivers), but you probably don't need fancier reflections anyway.