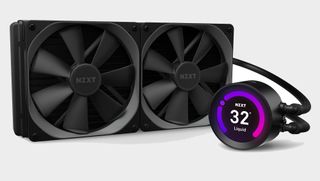 Now that RGB lighting firmly has a hold over nearly ever hardware component and peripheral, there's isn't anything left to give the unicorn treatment—or is there? NZXT has released two new series in its popular line of Kraken coolers, the X-3 and Z-3, the latter of which features a customizable LCD screen. (That's the new X53, X63, X73, Z63, and Z73, just to be clear.)

Instead of just displaying the NZXT logo in the center of the pump's infinity mirror, there is a 2.36-inch, 24-bit color LCD screen on all the Z-3 models that you can customize with either data from NZXT's CAM software or virtually any image of your liking. And yes, you can even use gifs. If you want to use faceplam Picard or dancing Jason Voorhees to express your personality via the AIO pump, you can do that. (Those would be my first two picks, anyway.)

While The X-3 series doesn't come with an LCD screen, it has received a few upgrades too. NZXT says the LED ring in the pump is 10 percent larger and comes with a rotating top that allows you to reorient the NZXT logo right-side up, regardless of what direction the cooler is facing. Those who have or have used a Kraken cooler with an AMD processor know that the logo faces vertically due to the placement of the mounting brackets on the motherboard. The mounting bracket for Intel motherboards faces horizontally, which means the logo is right-side up. AMD rigs can finally have the logo facing the right way.

The Z-3 series doesn't have a rotating top, but you can still orient the LCD screen in the direction you want.

Additionally, both the X-3 and Z-3 series feature and a brand new pump from Asetek for "better cooling and whisper-quiet performance at 800RPM," according to NZXT, as well as improved RGB lighting synchronization and easier installation.

The Kraken X-3 and Z-3 series are available now for the US only (everywhere else in early February). Pricing is as follows:

For those not inclined to math, that means swapping out the standard mirrored NZXT logo on the pump for the LCD screen is a $100 upsell. That might seem a lot to ask for a modest aesthetic upgrade, but it could be worse.

Something else to point out is that the Z63 and Z73 are basically the same level of cooling performance. This applies generally to all 280mm and 360mm radiators, but you get nearly the same cooling area with two 140mm fans as you do with three 120mm fans. However, some cases are designed to accommodate longer coolers while others go for wider mounts. Either way, cooling appears quite good. We haven't done extensive testing, but the X63 and Z73 have easily handled everything up to and including a Threadripper 3970X.