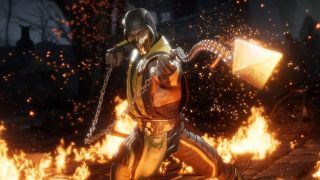 Mortal Kombat now has two movies in development. Alongside next year's live action Mortal Kombat movie, an animated feature is also in the works, focusing on everyone's favourite needy undead ninja. Mortal Kombat Legends: Scorpion's Revenge is due out in the first half of this year.

Aside from Scorpion getting centre stage, story details are still a mystery, though the title suggests a retelling of Scorpion's quest to avenge the deaths of his family and clan. In both the original and rebooted game universes, he starts out with a grudge against Sub Zero, his killer, but these days he's a good guy, defending Earth with his clan and even getting along with his chilly counterpart.

Patrick Seitz and Steve Blum will be reprising their roles as Scorpion and Sub Zero. Seitz has voiced Scorpion since Mortal Kombat vs DC, while Blum's been Sub Zero since Mortal Kombat 10. Not all the game's cast are returning, however, with Johnny Cage instead being played by Community's Joel McHale. Dexter's Jennifer Carpenter takes over from Ronda Rousey—thankfully—as Sonya Blade.

Warner Bros. Animation is responsible for a mountain of DC films—most of them quite a bit better than their live action counterparts—so it's not a surprise to see some of the same names involved. Teen Titans Go! vs. Teen Titans writer Jeremy Adams has written the script, and Justice League: Throne of Atlantis' Ethan Spaulding is directing.

Mortal Kombat co-creator Ed Boon is serving as creative consultant, so hopefully it's a wee bit more in keeping with the games than the original cartoon, Mortal Kombat: Defenders of the Realm.