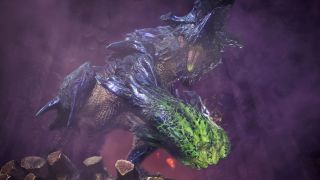 MHW: Iceborne monsters are the standout attraction to any new game or expansion in Capcom's famous series, and this frosty entry is no different. We may have the new Hoarfrost Reach region and its hub town of Seliana, new moves for all 14 weapons, the Clutch Claw, and much more, but the real star of any Monster Hunter game is always its magnificent beasts.

Iceborne significantly expands Monster Hunter: World’s roster of targets. There are new original monsters, fan favorites from past Monster Hunter games, and variations on existing ones. Here are the newest targets you can expect to face in Monster Hunter World: Iceborne.

Elder Dragon, Namielle is the water-based counterpart to Velkhana. The design of this monster reflects its affinity for the wet stuff with its squid-like tendrils, glowing veins, and wings awash in a glowing blue aura. The design of Namielle is truly formidable, and captures the creativity of Capcom’s artists.

Yian Garuga is a swift, lithe Bird Wyvern that made its debut in Monster Hunter: Freedom for the PSP. Characterised by sharp spikes and a distinct purple coloration, this is certainly a threatening beast. Beware its club-like tail that can cart even the best hunters in no time.

Yian Garuga poses a fiery and poisonous repertoire. Like the Rathian, Yian Garuga can use the two in tandem, so be sure to carry plenty of antidotes and fire-resistant armor. The monster’s speed is also one of its greatest assets, so look out for its many charging attacks.

Debuting in Monster Hunter 3 Ultimate for the 3DS, Brachydios is an explosive Brute Wyvern. This beast has a blue coloring with spotted green accents around its face and fists. Resembling a hunched boxer ready to strike, it cuts a confident and imposing form.

Those fists aren’t just for show, either. Brachydios likes to run across the arena pummeling anything in its way. Its explosive saliva also lends a fiery quality to its punches. Make sure to roll out of the way unless you want to take an explosive fist to the face.

Tigrex, another beloved beast, made its first appearance in Monster Hunter: Freedom 2 back in 2007. Its defining characteristics are its massive head and jaws that resemble something out of Jurassic Park.

This Flying Wyvern attacks using its muscular forelegs and multi-pronged tail. One of its favorite moves is a deafening roar that incapacitates targets and damages nearby objects. The Earplugs armor skill will come in handy when fighting Tigrex.

The face of the expansion, Velkhana is a new Elder Dragon that controls the power of cold. Its design is reminiscent of traditional dragons, with a slim body and enormous wings. It looks a bit like Kushala Daora, but covered in ice. Its tail resembles a multi-pronged icicle that must be avoided at all costs.

Naturally, Velkhana’s attacks involve weaponizing frost: its signature move causes spikes of ice to emerge from the ground. It also likes to hover above the arena and swipe with its tail. Many of Velkhana’s attacks can inflict the Iceblight status effect, so pack some Nullberries.

A brand new Iceborne monster, Banbaro is a towering Brute Wyvern with a massive pair of antler-like horns. It’s also covered in white fur and gray scales, with a wide, flat tail.

In combat, Banbaro’s go-to weapons are its horns; it likes to charge forward, dragging them along the ground. It can also pick up debris like trees and boulders and throw them, making it a threat even at a distance. When taking on this beast, break its horns as fast as possible.

Added to the game after Iceborne's original launch, Rajang is one of the most aggressive monsters you'll face. This hulking ape has been ripping hunters into tiny little pieces ever since its first appearance in Monster Hunter 2, and its ready to set its piercing red sights on you all over again in Hoarfrost Reach.

Rajang is ferociously strong at the best of times. But when it's enraged, its power elevates to a whole new level. As it turns gold, the punches from its muscular arms become even more devastating as it chains its moves together much more effectively.

Nargacuga is a fierce Flying Wyvern that first appeared in Monster Hunter: Freedom Unite back in 2008. The beast is covered in striking black fur and has a cat-like head, like a panther. Its piercing, red eyes that glow when enraged will strike fear into even the bravest hunters.

Nargacuga’s tail is its most potent weapon. Spikes will periodically emerge from the end of the tail ready to impale you. If you manage to dodge roll out of harm's way, though, it can get lodged in the ground, giving you an opening to attack. Nargacuga is sensitive to loud sounds, so Screamer Pods and Explosive Barrels are useful in this fight.

The epitome of the term 'fan favorite', Barioth first appeared in Monster Hunter 3 for the Wii. Resembling a saber tooth tiger crossed with some kind of serpent, this Flying Wyvern is as deadly as they come. It makes its home in icy locales, and uses its foreclaws to slide around the arena with punishing agility.

One of the fastest monsters in the franchise, Barioth is not afraid to wield its claws and tail to inflict Iceblight. It can also use its wings to glide about the battlefield, strike from above, and produce a strong wind from its fanged mouth. Your best bet here is to wait until it becomes fatigued before attacking.

Another Iceborne original, Beotodus is the ice-based cousin of Jyuratodus. This Piscine Wyvern swims through snow as if it were water, and boasts a sharp horn on its head. It likes to cover its body in snow, as Jyuratodus does with mud.

Due to Beotodus’ penchant for staying beneath the snow, it can be hard to track. It emerges to spit ice rocks at you, and can even interrupt your fights with other monsters. Like the other ice-based wyverns, Beotodus can inflict Iceblight, so be sure to pack some Nullberries.

Making its debut in Monster Hunter: Generations. Glavenus is a brute wyvern in every sense of the term. It resembles a T. Rex, but with more... spikes. A pair of spines run along the length of its back, and it’s covered in dark red scales. It’s most frightening feature, though, its enormous bladed tail.

Glavenus wields its tail like a sword, swiping at anything that comes near. It can also spit fireballs at you, meaning even distance doesn’t ensure safety. Glavenus is capable of inflicting the Fireblight and Bleeding status effects, so prepare for this scrap accordingly.

Another fan favorite from 2010’s Monster Hunter: Portable 3rd, MHW Iceborne Zinogre is a Fanged Wyvern with devastating thunder attacks. This scaly, muscular beast is covered in rounded spikes and boasts a huge, flat tail. It also sports a pair of horns on the front of its head and massive claws on each of its four feet.

Zinogre uses its muscular form to bully hunters, often throwing its weight behind short charging attacks. Make sure you keep your distance from it's swiping claws, too. When it’s sufficiently enraged, Zinogre can release a charge of lightning, inflicting Thunderblight, or even Paralysis.

Iceborne doesn’t just include a host of new monsters: it also gives us twists on existing ones. Similar to variants already present in Monster Hunter: World—like Black Diablos, Azure Rathalos, and Pink Rathian—these new versions put a spin on previously-fought fights. Here are the new variants you can expect to find in Iceborne: