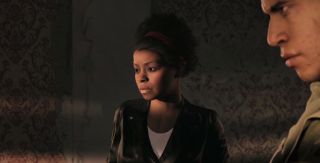 Although we were briefly introduced to Haitian Syndicate leader Cassandra last week, Mafia 3’s latest Inside Look video details the somewhat tumultuous relationship she shares with protagonist Lincoln—and how the unlikely partnership could help and hinder both parties.

We learn that the “Voodoo Queen”, as Cassandra’s otherwise known, has a separate agenda to Lincoln but that a shared goal by way of common enemies pulls the pair together.

“The two of them don’t trust each other too much,” says senior writer Charles Webb in the short featured above. “Lincoln is concerned that at any given point in time Cassandra may turn on him, and Cassandra doesn’t trust that he’s going to look out for the people in the Hollow in the midst of his war on the Marcano crime family.”

Lead writer Bill Harms adds: “Cassandra realised that she’ll never realise her dream of taking the Hollow unless she assists Lincoln. But also part of that conversation is the idea that as Lincoln dismantles Sal Marcano’s organisation, he may hand over other sections of the city to her.”

I guess we’ll find out either way come Mafia 3’s release on October 7. Until then, check out Dave Houghton’s hands-on, or have a gander at 20 minutes of in-game footage.