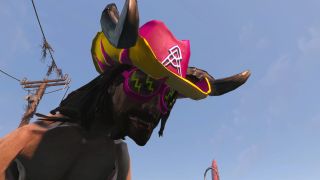 Referring to Macho Claws as a mod is a disservice. It's the continuation of a proud and noble tradition of inserting 'Macho Man' Randy Savage, a legend of professional wrestling, into Bethesda games. First he was a mighty dragon in Skyrim, and now the Man has come to Fallout 4.

Unfortunately, the radiation has got to him (nobody's perfect), and Randy can be found roaming the Commonwealth as a deathclaw, making him marginally less dangerous than he was before. Still, one glimpse of that hat and those shades and all the power armour in the world won't save you. Macho Claws is the proud work of AronaxAE and FancyPants, and you can download it here. If that isn't enough for you, here's our selection of some of the other greats.