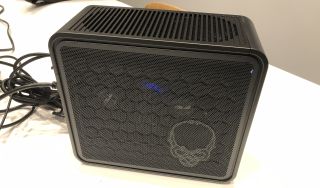 Intel has unveiled the next tiny PC in its NUC line. The Intel NUC 9 Extreme Kit, or Ghost Canyon NUC, was announced at CES and sounds like a significant upgrade over its predecessor. It's a little bit larger than the router-sized NUC 8, but it's still ridiculously small for a gaming PC.

One of the biggest differences between Ghost Canyon and its predecessor is that you're not limited by what you get in the box. It's powered by an i9 processor, but you'll be able to eventually upgrade the CPU. Its size also means it can fit a proper desktop GPU, adding yet more upgrade potential.

Details are still pretty slim at the moment, but given that this is an enthusiast bit of kit, making it a bit more future-proof and moddable seems like the right way to go and a much better alternative to a desktop PC than the NUC 8. Normally you need to add your own storage and RAM, so it seems likely that will also be the case here.