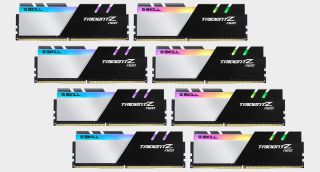 G.Skill on Monday unveiled a new high-performance, high-capacity 256GB Trident Z Neo DDR4-3600 memory kit that is intended to complement AMD's recently launched 64-core/128-thread Ryzen Threadripper 3990X CPU. And what a pairing it would be, for those who have the requisite disposable income.

Is it worth it? Not for a gaming PC, or even bragging rights—if you're looking to turn heads, apply that kind of money on a down payment for a sports car instead. I'd do it myself, except I don't have $5,500 burning a hole in my pocket (plus I'd be accused of having a mid-life crisis). The best RAM for gaming right now is still a 16GB or 32GB kit.

I won't go so far as to say that 256GB will never be needed, though. Microsoft co-founder Bill Gates supposedly once quipped "640K ought to be enough for anybody" (he denies ever having said that), and that turned out to be very, very wrong. And yes, RAM speed and capacity matter for gaming. You just don't need anywhere near 256GB right now.

As with the 3990X, having 256GB of RAM is useful in other select scenarios, like 3D rendering and heavy duty content creation chores. What's neat about G.Skill's newest 256GB kit is it's relatively fast at 3,600MHz. The timings check in at 16-20-20, and the kit runs at 1.35V. G.Skill validated those specs on an Asus ROG Zenith II Extreme Alpha motherboard.

If this one's on your radar, you'll have to wait a bit—G.Skill says it will launch in the second quarter of this year.