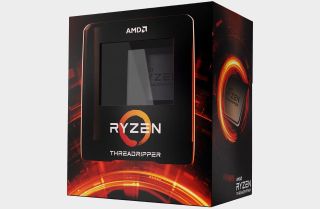 If you're looking to spend nearly four grand on something, you have options. Take a a vacation, go on a cruise, plop a down payment on a new car, or build a spare-no-expense gaming PC are a few possibilities. Or you could blow it all on a single CPU, AMD's new Ryzen Threadripper 3990X.

The Threadripper 3990X made its retail debut today, at the same time that embargoes lifted on performance reviews. We don't have one of our own to offer—AMD never sent us a chip, perhaps an admission that the 3990X is all kinds of overkill for strictly a gaming setup. And it is.

If you're curious about all-around performance, however, our friends at AnandTech and Tom's Hardware both posted reviews of the 3990X. Summed up, TH said the 3990X is "pretty much exactly what AMD says it is," which is a "highly specialized processor that provides incredible performance in a narrow cross-section of workloads, but at an extremely attractive price point given its capabilities."

That latter bit is an important qualifier. For a gaming PC, you would be far better served by buying a 'mainstream' processor, be it a Ryzen 9 3900X or Intel Core i7-9700K, two of the best CPUs for gaming, or even something cheaper. Assuming you don't have an unlimited budget, it would make more sense to pour a chunk of your funds into a higher end GPU than to go hog wild on a high-end desktop (HEDT) processor of any kind.

So why release a chip like the 3990X? One reason is for posterity. AMD is flexing its muscles and showcasing how much legroom its 7-nanometer Zen 2 architecture has to offer. The other reason is because there actually is a market for HEDT processors. The asking price is steep, no doubt, but in the world of workstations where a crazy amount of cores and threads are needed to hammer multi-threaded workloads (Hollywood-level 3D rendering, for example), there is some value here.