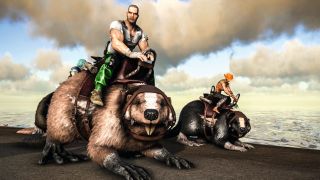 Online roleplaying has been around since the dawn of the internet. Since 1975, in fact, when the first primitive Multi-User Dungeons (MUDs) were created. In recent years, our understanding of what roleplaying games are has changed—loot, statistics and levelling coming to the fore. But for purists it’s always been about inhabiting a character and seeing the world through their eyes.

While roleplay, or ‘RP’, servers are still around today, it’s mostly a niche concern, restricted to underpopulated WoW realms or the persistent worlds of Neverwinter Nights. Now a new place to roleplay has emerged, from the unlikely source of dinosaur survival sim ARK: Survival Evolved. Even more interesting is the way streamers on Twitch have adopted the game, creating a new hybrid form of entertainment where viewers can watch as events unfold, talking to streamers while they inhabit their characters. Full-time streamer and games writer Debbie ‘Weefz’ Timmins likens it to “a soap opera where the viewers get to talk to the actors while the action is happening”. Also, there are dinosaurs.

ARK roleplay’s appeal to viewers is multifaceted, but perhaps the biggest draw is that it’s often riotously funny. Characters tend to be drawn in broad strokes, their silly accents and outlandish backstories designed to make them stand out from the crowd. The result is very much a case of the lunatics running the asylum, of dinosaur-infested lands blessed or burdened with a population of misfits and comic concepts. You can be watching a streamer pottering around on a dinosaur, chatting to their viewers, only to see them abducted by the local cult. Or perhaps they’ll don glowsticks and take part in an impromptu rave, characters manically gyrating in cages while the streamer succumbs to hysterics.

Perhaps my favourite creation is that of British streamer Ewan ‘NuttyAlmond’ Almond, who plays the terrifying clown Bing Bong. Bing Bong is a cheerful, rather simpleminded individual, whose life is complicated by his evil twin, Bong Bing, who lives on the back of his head. At least he did until an ill-advised, self administered medical procedure forcefully removed his face and placed on the wall of Bing Bong’s abode. Inexplicably, Bong Bing retains the ability to talk and intimidate visitors. NuttyAlmond provides the voices for both characters, the sanguine Bing Bong a stark contrast to his sinister sibling.

Almond plays his characters with singleminded focus, referring to a fondness for acting in his “younger days” (he’s 21) and admitting it can be daunting to know thousands of people could be watching at any time. Almond looks for inspiration in films and entertainment, attempting to find funny or disturbing character ideas. “I try to picture, how could I create one similar that would fit within the world and restraints that the game presents.” Above all, his focus is on having fun. “If you are, then most likely the people viewing you are too.”

I’m interested in how difficult it is to cope as a streamer. Not only do streamers have to consider their actions through the lens of the character—“what would Bing Bong do?”—but they have to consider their audience, as well as practical factors such as time zones and lag. I ask Weefz whether it’s difficult to jump in and out of character, juggling between being herself, interacting with her audience and playing her character in ARK. “The hardest part is more keeping track of conversations than personas,” she says. “I like to be very interactive with my viewers, which means I often find myself trying to juggle an RP interaction, greeting a new follower or subscriber, and trying to respond to something a viewer asked, all at once.”

Does it add pressure, the constant awareness that you’re being watched while interacting with the other characters? “As a variety streamer trying to make a living on Twitch, I do have to be constantly aware of the viewership. Simply hanging out in the world is fun, but being live for five to nine hours a day can be exhausting, and you want to make it count by putting on events or developing character storylines. We’re constantly competing with other streamers, and even television for viewers.”

Popular Canadian streamer GameWithMe talks about the pressure to entertain, and how different parts of the audience enjoy different aspects of the game. “When a new season starts, there is a period where everyone is farming resources, building up their homes and taming dinosaurs,” he says. “Some viewers enjoy this, and some don’t. There’s also pressure if you play an aggressive character—that your viewers always want to see blood, or see someone die. This is fine, but we have a strict set of rules to foster roleplay. Going around killing everyone does not foster good roleplay.”

For Weefz, good roleplay comes from breaking out of her shell—making decisions that she as a person might shy away from. In many ways her streams are improvisational comedy, and the rules are mostly the same. “The most important rule is to say, ‘yes, and...’ to keep roleplay moving. To put on a good show for viewers, I always try to run with whatever happens in-game.” This attitude led her into what she describes as an “accidental marriage”. “One day, I was standing around trying to get to know the neighbours, when a friend from a previous season flew down to say hello. He asks us to move around a little. ‘You stand here, you stand here, OK, you move forwards a little, perfect!’” Weefz found the process a little strange, but in the spirit of roleplay complied. “Then he says, ‘by the power vested in me, Jon Clifton, I now pronounce you husband and wife.’ Wait, what?”

Does being married in the game bring its own set of responsibilities? Surely her character’s story and the content of her stream are now bound up with the fortunes of another person? “Being spontaneously married to another character does affect the stream, yes. Being asked out on dates is the obvious one—saying yes instantly makes my character a bad person, even if my in-game husband has been ‘asleep’, or offline, for two weeks because he’s playing the latest MMO.”

What makes ARK the right kind of game for this kind of community to grow around? GameWithMe puts it down to variety. “The sky’s the limit. There are so many great mods and things you can make in the game that allow people to come up with amazing characters. On top of that you’re able to tame creatures from prehistoric eras, which adds even more roleplaying possibilities. The game by itself is entertaining and action packed, but when you add roleplay into it, it becomes completely different. Nowhere else in ARK will you find wizards, dinosaurs, warlords, children, armies and religions all coming together.”

Weefz’ initial response is a rather more succinct: “dinosaurs”. But she agrees that continued support from the developers and a vibrant modding community are key. “The support from the developers has been incredible. In the ten months since launch, they’ve constantly been adding new creatures, new biomes and other elements that keep the world fresh. They obviously want to support the roleplay community as well, because hardcore ARK PvPers have no need for tables, chairs or shoulder-mounted monkeys.”

NuttyAlmond is keen to praise the admins, roleplayers and viewers. “The roleplay community stands out thanks to the massive amount of talent within it, whether they’re a large streamer or somebody doing it purely in their spare time. Everybody plays their part brilliantly within the greater story.”

The roleplay scene within ARK continues to grow. The first and most popular server is Twitch RP, but rivals such as ArkLife and Critical Gaming have sprung up and drawn players with their varied collection of rules and mods. GameWithMe is an admin at Twitch RP, and says the server has over 1,000 whitelisted players. Around 1,000 new applications are received by the team every month, and streams can draw in thousands of viewers, particularly during the summer months when school holidays see a surge in Twitch viewer numbers across the board. It seems that ARK roleplay, and its streamers and viewers, are destined to collaborate and entertain for a long time to come.