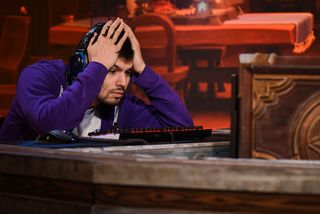 In all honesty, I expected the first season of Hearthstone Grandmasters to be an unmitigated disaster. My fear was largely based on the league's use of the as then largely untested Specialist format, which involves players bringing a single deck to each match, plus two slightly tweaked variants. The obvious worry was that it would lead to stale, samey match-ups, and when the first week saw a slew of Warrior mirror marathons, that fear looked justified. Over the months that followed, interest picked up as the players learned to predict and counter-pick their opponents better, but the meta eventually settled into some variation of the three best decks—Bomb Warrior, Conjurer Mage and Lackey Rogue—played out rock, paper, scissors style.

So, to no real surprise, Blizzard has decided to switch formats as we gear up for the second season. Today the Hearthstone Esports team announced that Specialist will be replaced by a new variant of the much more established (and better liked) Conquest format. Matches will be best-of-threes and feature something called a shield phase. Here's how it works:

"We solicited feedback from our Grandmasters and the feedback was that Specialist was not providing enough class variation for the weekly format of Grandmasters," Drew Higbee, Hearthstone Grandmasters product lead, told PC Gamer. "Switching to Conquest with a Shield Phase will allow our competitors to bring their strongest decks while showcasing their high-level understanding of all the classes in Hearthstone."

On the face of it, it does sound like it should lead to more deck variety and the potential for greater strategic thinking when building line-ups. I hope so anyway, because despite the issues with Specialist, I actually like Grandmasters quite a bit. The standard of play was mostly very high, and as someone who loves chilling with a long tournament on while the casters bullshit away in the background, knowing that each weekend would bring three days of top level Hearthstone was lovely.

It also helps that the stakes will be slightly higher in season two. For the first season Blizzard declined to relegate the worst-performing Grandmasters in order to give the pros some initial security, but next time up to two players will be in danger of getting dumped from the league. In response to complaints that there isn't enough movement into and out of Grandmasters, Blizzard has this to say: "Relegation expansion for Grandmasters 2020 will be considered to further increase the maximum number of relegation/promotion spots per season."

On that note, it was also recently confirmed that David "Dog" Caero has decided not to bother with the second season of Grandmasters. He will be replaced by Edward "Gallon" Goodwin, the player who came second at the Las Vegas Masters, earning himself a cool $50,000 in the process and becoming eligible for the next open spot in the league.

Grandmasters Update 📰 ❗@Liquid_hsdog is stepping down from Grandmasters ahead of Season 2 to focus on streaming and other personal pursuits. We are excited to announce that @GO_Gallon, runner-up at #MastersTourVegas, will be promoted to fill the spot! pic.twitter.com/MeTDjriUawJuly 25, 2019

Given his popularity, Dog's absence will be a loss, but isn't entirely unexpected. The player had intimated that the amount of time Grandmasters takes up, plus Blizzard's requirement for him not to stream when his region was being played, meant it made little sense for him monetarily.

Gallon is an exciting replacement who I'm looking forward to seeing compete  regularly once Grandmasters resumes on Friday 23 August 23.

Elsewhere in Hearthstoneland, we're deep into reveal season for the new set, Saviors of Uldum, which lands on Tuesday 6 August. You can see all the cards that have been revealed so far here, and there will be a stream on Twitch tomorrow at 10 AM PT. You can find more info on that on Blizzard's blog. Personally I'm hoping to pull a Siamat from my packs. The new neutral legendary which was revealed today looks insane, and looks like a surefire new entry into our best cards list. I can't wait to try my theorycrafted Shaman Battlecry Quest deck next week.

That's definitely going to be a thing, right?