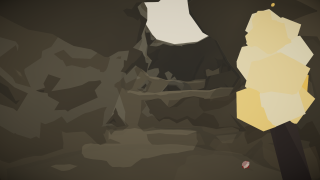 Aha, another indie gem from Sokpop before 2019 closes out. It has everything a good videogame should have: Torches, caves, procedural generation, mournfully wailing children. There’s something good about sticking to the formula, I say. Anyway, Goblet Cave gives you simple tools like torches, ropes, platforms, and ladders, then sends you down into a cave to find the titular Goblet. Along the way you’ll rescue lost children, collect rubies, and curse viciously when you miss the toss of a grappling hook. It’s a little game, being only $3, and takes about a half hour to play. Each playthrough is procedural though, so you can do it a few times before you get a little tired of it.

You can find Goblet Cave on itch.io. It’s also free to supporters of Sokpop Collective’s Patreon.

Based out of Utrecht, the Netherlands, Sokpop Collective is a four-person indie incubator which runs a Patreon that funds the release of two games every month. They’ve been doing that for a few years now, and we’ve even written about a few. They recently released full-size train tycoon Soko Loco as well.