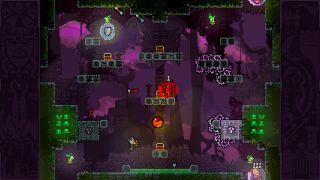 The Epic Games Store's 12 Days of Free Games event continues, this time letting you murder your mates with your archery skills in the superb TowerFall Ascension, which is free between now and 4 pm GMT/8 am PST tomorrow.

TowerFall remains one of the best local multiplayer games around. blisteringly fast, chaotic, but incredibly easy to pick up, it's one of the first games that comes to mind if you've got three people over.

Marsh Davies had plenty of good things say about it way back in 2014 in his TowerFall Ascension review, for which he gave it 90/100.

"It makes a pretty good case for the unique joys of lagless offline gaming, permitting pixel-precise inputs calculated in the slimmest slivers of a single second, for which no clever server-side prediction could compensate," he said. "This is a game of deftly deployed shortrange evasions: side-steps beneath cover, mid-air dashes and chained wall-jumps that send your character pinballing through the environment. A player might drop from the top of the screen, loose an arrow through a narrow alignment of architecture, catch an incoming missile mid-air, and then dart off to the left, wrapping round the screen to take a shot from the other side."

Another game will be appearing tomorrow, though its identity is still a mystery.