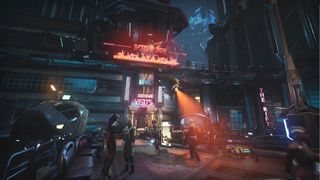 Gamedec is a cyberpunk RPG from a Polish developer, but you'd never mistake it for Cyberpunk 2077. Set in Warsaw, in a future where people escape reality by plugging into virtual worlds, it's an isometric detective yarn that plays out case-by-case as you solve VR crimes with real consequences.

The demo, unfortunately hands-off, begins in a familiar street soaked in rain and neon. There is, of course, a bar nearby. It's a watering hole for gamers that's filled with topless women and places for people to plug into VR. It's a sleazy, bleak joint, but we don't stick around. There's a client who needs the services of a gamedec, and they're waiting inside a free-to-play farming sim.

Each case is a discrete mission with several possible conclusions based on evidence you've collected, which you've then got to tie together like a cyberpunk Sherlock Holmes. In this case, the client wants someone to look into people getting sick while playing the farming sim, which also happens to be set in the Wild West. Even the UI changes to match the new setting.

Pretty quickly, the farming sim gets weird. There's a suspicious fella spying on people working the fields, a player collapses but isn't automatically logged out and a mod is discovered that allows the user to accelerate time in the game. Each of them opens up a new avenue of investigation, but you can ignore them or get locked out of them, potentially losing that piece of information forever.

To find out more about the collapsed player, it's possible to hack the device they're connected to—the couch. Various skills can be used to give the gamedec the upper hand in when they're interrogating someone or exploiting a game, which can then become permanent 'aspects' that guarantee success. With the Hackerman aspect, for instance, the intelligence roll can be skipped during hacking attempts, making you a cyberspace wiz.

Anshar Studios CEO Lukasz Hacura says that the team prototypes the cases by running pen and paper sessions where players have to come up with their own solutions, then they pick the most interesting or common ones and tries to implement them in Gamedec. It's still the illusion of choice, but it's rooted in the anything goes philosophy of tabletop roleplaying.

There will be plenty of ways to solve a case, then, and even if you made terrible decisions and have a series of unlucky rolls, there are always going to be enough clues to close it—though maybe not to your satisfaction. You could even phone it in. Maybe you're a crappy detective, or maybe you've been paid to not follow the trail of evidence. Whatever conclusion is reached, however, the world just adapts and moves on. You'll still need to live with being an awful person, of course.

Notably, nothing violent happens in the demo. That won't always be the case—you'll be able to shoot people, hack turrets and find other less than peaceful ways to find information, but there's no dedicated combat system. These opportunities will crop up as cases unfold and play out like other actions. Hacura likens it to Quantic Dream's Detroit: Become Human, though without the quick time events, but he emphasises that Gamedec is an RPG, not an adventure game, and bristles at the idea that RPGs need to have combat.

Despite once being prescient, cyberpunk can sometimes feel a bit stuck in the '80s, but Gamedec seems a lot more unconventional. It's exploring things like gold farming, exploitative game mechanics and the seedier side of the medium, so maybe it has something interesting to say. A proper investigative RPG is also a rare treat, especially outside of tabletop games.