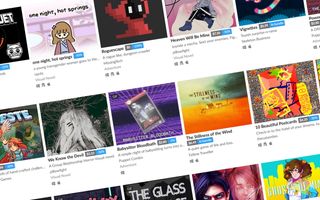 Holiday sales are now ticking away at all the usual places: Steam, Epic, Origin, Ubisoft, Microsoft. And also over at indie storefront Itch.io, which is offering an array of "Holiday Picks" for 2019, and also a bunch of games that just happen to be on sale now.

One thing about Itch.io sales is that they generally don't have the bells and whistles, or basic organization, of those on the bigger sites. It's kind of like the MySpace of digital storefronts: It works, it's fine, but that layout is from a whole different era. It makes the sale more difficult to browse than it should be, which is a shame because there's some good stuff here. Such as:

Itch.io isn't going to offer the same sort of blockbusters as Steam or EGS (obviously) but it's a great site to go digging through for offbeat or experimental stuff. And you never know what you'll stumble across. I got pulled into the Rusty Lake series a few years ago via the very cheap Rusty Lake Hotel, and it's become one of my favorite super-bizarre puzzle-adventure series.