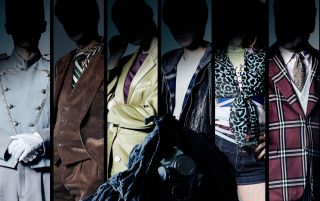 Danganronpa creator Kazutaka Kodaka is working on a mystery FMV game, Death Come True, announced today. Details are slim at the moment, but the characters have been teased and the lead actor will be revealed tomorrow, once the countdown on the official site ends.

The Danganronpa series only came to PC in 2016, long after it initially launched on PSP. Pitting eccentric high school students against an evil bear in a game of murder, it spawned several sequels and spin-offs, as well as anime and manga adaptations. They're bizarre but brilliant visual novels.

While Death Come True's setup hasn't been unveiled yet, you probably don't need to worry about the switch to FMV making it more grounded. The announcement was accompanied by an obscured image showing off some of the characters, though not their faces, and what's presumably the game's antagonist, who looks like a post-apocalyptic Grim Reaper. All of their get-ups are all pretty unusual, in fact. And right now clothes are all we've got to go on.

This isn't to be confused with Death March Club, the 2D platformer that's also being developed by Too Kyo Games. Kodaka founded the studio with Zero Escape creator Kotaro Uchikoshi and announced four projects. Death March Club is due out on PC in 2020. Death Come True, meanwhile, doesn't have a release window yet, and Too Kyo Games is yet to announce platforms.