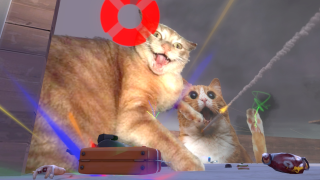 Back in 2015, the announcement that Star Wars: Battlefront would launch with skill-based matchmaking instead of a server browser felt newsworthy. Today, a game releasing without custom server support is just business as usual. Gradually, over the last 10 years, the server browser has fallen out of fashion. Battlefield 5 is perhaps the only game I've played this year that offers one, and it's a shadow of what was once a major feature of of the series. With only limited configuration options, it exists simply as lip service to player expectations.

You just need to look at Team Fortress 2's menu to see how much things have changed. Where once the server browser was front-and-centre, now it's buried below a suite of matchmaking options.

Perhaps this sidelining of custom servers was inevitable. After all, it's harder to sell map packs when players can download an endless stream of player-made alternatives. And it's hard to make players care about your persistent progression system if player-run servers can offer decentralised leaderboards. The systems designed to keep players coming back into multiplayer—many of which were popularised in the early 2010s in response to the perceived threat of pre-owned sales of console games—don't work if players have all the control.

That's not to say matchmaking is bad. There are obvious benefits to matching players based on their level of skill. It's easier for new players to get to grips with a game, for one, but also gives those with more experience a more interesting challenge. Stomping newbies may be fun for a while, but it's destructive to the long term health of a game.

Matchmaking also lets developers tailor playlists based on the size of the playerbase. It's a relatively benign way to keep a game feeling populated, even after its initial popularity has waned.

The downside, for me at least, is that matchmaking misses out on a key component of what felt like such an important part of the PC gaming ecosystem throughout the '90s and '00s.

I took an unintended break from PC gaming in the early 2000s, during a period when I could only afford a laptop that threatened to go nuclear if I so much as looked at C&C Generals. When I returned around 2007, I had almost a decade of 3D gaming to catch up on. In doing so, I fell in love with the wild and chaotic world of first-person multiplayer shooters.

I arrived late, but it didn't matter—the party was still raging. The FPS scene was a hotbed of creativity, as modders and mappers filled the most popular games of the day with strange, delightful curios. As someone who'd spent the late-'90s sampling every Tiberian Sun mod I could get my hands on, it was beautiful to see, and it was all made easy thanks to PC gaming's support for custom servers.

The server browser became a shop window into an infinite number of candy stores, promising everything from the mundane—24/7 de_dust—to the sublime. Race maps. Prop hunt. Mario Kart. Instagib. Achievement farming. RP. Laser death cat. A new map, a new mode, a new chance to see something you'd never seen before, and, sometimes, would never see again. Just double-click on a map you'd never heard of before and you'd be transported into a brand new world.

I regularly dipped into a Half-Life 2: Deathmatch server that disabled everything but the Gravity Gun—forcing players to fling toilets, radiators and circular saws at each other. I spent more time than I care to admit playing TF2 in an instant respawn server that featured special power-ups, no time limit, and a set of rules that all-but-insured nobody would ever complete the objective. I once wasted an afternoon in GMod as a watermelon, rolling around a race course with other players. I never found that server again, but I didn't really need to. Ephemeral weirdness was part of the charm.

To be clear, PC gaming isn't any less weird or wonderful in 2019. The chaos is still here, and still just as glorious, but now it's found in Minecraft mini-game servers and through GTA5's FiveM mod. It's found on the front page of Itch.io, or as a standalone project from the makers of some beloved mod. In some respects there's less need than ever for custom servers, because—also this decade—game making tools became more widely available and easier to use. The fact that creators can more easily make their own game rather than relying on blockbuster releases as the base for their creativity is ultimately a net positive.

But if custom server mods where what tempted me into exploring a game, it was the personalities of my favourite servers that kept me coming back. It was the specific map selection, or the perfect combination of settings, or just the atmosphere created by the regulars. It was dropping into a favourite TF2 server and knowing that sometimes everybody in it would be duelling with the Heavy's finger emote—with bans immediately issued to anybody who dared shoot an actual gun.

Player-run servers are a hangout. You join—often mid-way through a match—and play around until you've had enough. The stakes can be as high or as low as the server's culture dictates. You have your regulars, but also a rolling procession of transient visitors that help keep the place feel active—like tourists stopping in at a local pub. And, yes, servers can be toxic or hostile or just generally not worth your time, but it always feels special to discover one that you want to come back to.

Matchmaking, meanwhile, is a performance. You queue up, load in and you're on—playing with unknown people to complete an objective and win the match. If something out of the ordinary happens—if a dance party breaks out in a Destiny 2 survival match—it's almost always because something has already gone wrong (usually half of your team deciding to peace out mid-round).

There are pros and cons to both methods, but I think it's a shame just how completely the pendulum has swung in favour of matchmaking. There are games that experiment with both; that separate out custom servers and matchmaking, much like the current version of Team Fortress 2—which, at its best, is still incredibly weird. And there are still games that fully embrace the spirit of '00s multiplayer shooters, like Warsow or Xonotic—both free and worth checking out. But these feel like the exception rather than the rule, and, inevitably, that's reflected in the number of players populating their servers.

Instead, the very idea of decentralised communities has migrated out of individual games and become broader and more freeform. Maybe I just need to find a good Discord server instead.