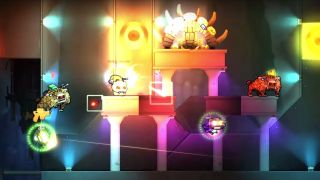 Cobalt is a sweet couch arena brawler with excellent rockets. Though Microsoft made it sound as though we were going to lose it to Xbox exclusivity, Cobalt will in fact come to Steam this October. If you bought the prototype edition ages ago, you'll get a Steam key for the finished version free.

It's been a while since we touched the old playable build, which is available to try and buy here, The game is made by Oxeye and published by Mojang, who made that Minecraft game you may have heard of.

Disclosure: chief word officer at Mojang Owen Hill used to work here at PC Gamer. I haven't seen him for years on account of him living in Sweden, which is good because I think I still owe him at least one beer.