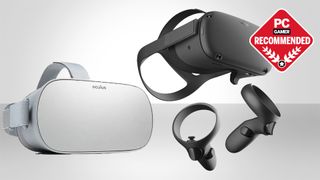 If you're looking to pick up the best VR headset for the release of Half-Life: Alyx, you've come to the right place. When creating this list we've tried to offer a number of choices for those that are eager to jump into the world of VR, taking cost, comfort, and convenience into account, as well as the all-important FOV and resolution. You can rest assured that each of these recommendations is compatible with Half-Life: Alyx, though the Oculus Quest will need a cable, despite being otherwise wireless.

If money isn't an issue and you're willing to spend the cash for the best VR gaming experience out there, the Valve Index is the way to go. And if you're going to spend that kind of money, you'll want to make sure you have a high-end gaming PC to get the most out of it. We've detailed some of the finer points of Valve's VR headset in its listing below.

But the best VR experience doesn't necessarily have to cost you a small fortune. We've included several less-expensive VR headsets for those on a budget. The Oculus Quest may not be the most powerful but for the price and lack of cables—as well as the optional link cable to include PC-only VR titles—it offers one of the best VR experiences out there.

The Oculus Go was a solid first step towards proper wireless VR, but it was more a proof of concept than anything. Now, the much more substantially specced Oculus Quest has arrived at the same $399 price point as its wired counterpart, the Rift S, and standalone VR finally has a proper champion.

The freedom of untethered VR is genuinely powerful—even after becoming more than slightly jaded by spending tens of hours in Oculus' other headset offerings, the Quest was able to wow me with its power and portability. While it's not quite at the same performance peak as the Rift S, in practical terms you're unlikely to ever notice, and the magic of being able to look through the passthrough cameras like your own eyes and walk around your house is fully unique. Going on a trip? Toss the Quest in your bag and go. At 571g it's still pretty lightweight, especially since it doesn't require sensors or cables or any other constrictive accessories (other than the excellent, refined Touch Controllers), and it doesn't need to be connected to a massive, powerful gaming PC to function.

You can tether the Quest to your PC to play games otherwise only available on the Rift, though. That functionality is currently in beta, and will be required to play Half-Life: Alyx or other VR games that only run on PCs. You can use any "high-quality" USB 3 cable, but this year and next Oculus will be seilling "a premium, custom optical fiber cable" for the Quest. You won't get the Rift S experience exactly, but at least games that require a PC aren't off-limits if you own a Quest.

The Quest is currently the headset that delivers most convincingly on the magical promise of virtual reality, to the point that $399 seems like a bargain.

The best VR headset from the Windows Mixed Reality group

The Odyssey+ (on sale now at Amazon) is Samsung's refresh of, you guessed it, the original Odyssey HMD, a substantial improvement and the best of the current crop of Windows Mixed Reality (WMR) offerings. Don't let that category name fool you, the Odyssey+ is primarily a dedicated VR headset—the "mixed" nomenclature comes mainly from Microsoft's initial eagerness to bundle HoloLens into the same ecosystem as its VR initiative.

The Odyssey+ boasts one of the best resolutions available in consumer headsets at 2880x1600 and also takes advantage of a proprietary anti-screen door effect Samsung deploys to reduce the fine grain you see in the majority of HMDs. The SDE in the Odyssey+ is practically imperceptible, and combined with the WMR standard of inside-out tracking provides a remarkable level of immersion.

We were initially reluctant to include the Odyssey+ or its predecessor on this list because of its relatively slight games library; while it enjoys full Steam VR support, it misses the growing number of Oculus and Vive exclusives. Recently, however, HTC has expanded Viveport support to all of the WMR headsets, and adding that expansive subscription library to the Odyssey's catalog is a huge boon.

The best VR headset for a massive library of games

AU
$649
View at Amazon
Excellent resolution and refresh rate
Great, deep library of games
Inside out tracking
LCD screen in place of OLED
Lower refresh rate than the original Rift

The Rift S is an interesting proposition. It fully displaces its predecessor, the original Oculus Rift, and is definitively an upgrade, but it's being sold at the same price point that the original retailed for (and still does, on some storefronts). That said, it is also an odd step back in some baffling ways, with a slight decrease in refresh rate and LCD lenses rather than OLED.

That said, the Rift S is easily the best mid-level wired headset you can buy for PC. Not only does it have a deep library of games—a library that's matured and expanded tremendously since the launch of the original Rift—its higher resolution and more comfortable fit means the original Rift is basically now obsolete (unless, of course, you can find one at a deep discount). While the original may have a slight advantage in some of the aforementioned categories, the actual experience of wearing the Rift S is far superior, especially given that it fully supports inside-out tracking, meaning you don't have to buy, wire-up, and find a place for external sensors in your play space.

If you've already invested in a mid-tier or higher gaming PC and want a powerful headset and don't want to spend a massive amount of cash for the privilege, the Rift S is a clear winner. It may be more of an iterative upgrade from the original that we originally hoped, but it's still an excellent piece of hardware, and a fantastic way for PC owners to dive into virtual reality for the first time.

Let's begin with a cavet: the Index is a headset that hovers just inside the qualifications for this list. It boasts some of the best visuals of any mainstream, commercially available HMD, with a display resolution equaling the Vive Pro, Quest, and Odyssey+ but paired with a 120Hz refresh rate (up to 144Hz in a currently unsupported, experimental mode). The FOV, at around 130°, is also best-in-class, and there's virtually no detectable screen door effect inside the headset. It also boasts some impressive technology and handy convenience features, like per-finger tracking on the excellent Index controllers, USB passthrough for future accessories, and fantastic, crystal clear audio via the near-field speakers, which hover just above the ears. It's also comfortable to wear, built from carefully selected, high quality materials and with top notch weight distribution.

But all that comes at a price. As Bo said in our Valve Index review, it's the best VR headset on the market... if you don't consider the value proposition. As he points out, at nearly a thousand dollars, the complete Index offering costs more than double the price of the Rift S or Quest, and almost exactly double the MSRP of the Odyssey+ (which can be regularly found at a discount). There also aren't any solid use cases for the finger tracking technology that's the marquee feature of the controllers—though that'll surely change with the release of Half-Life: Alyx next year, which Index owners will get free. (Free after spending a grand, that is.)

If you have the budget and a powerful gaming PC and want to show off the best VR has to offer, the Index is the best premium offering currently available.

Field of view refers to the amount of an environment that's visible to an observer, in VR it's the extent of the game world that's visible in the displays. A broader FOV in a headset is integral to a feeling of immersion.

Broadly any wearable mounted on the head with graphical capabilities, but often used to specifically refer to VR headsets.

The delay between an input and a response, in VR the delay between user input through a controller, moving your head, or other method, and the response on the headset displays. Low latency is vital to reducing nausea in VR, which is most intense when there's a delay or stuttering between moving or looking and the display reacting.

The measurement in pixels, horizontal and vertical, of an image or display. Higher resolution in VR is important because the displays are so close to the user's eyes, which emphasizes jagged lines, pixelation, and the screen door effect.

The number of images a display is capable of displaying per second, measured in hertz. High refresh rate is important for VR similarly to latency, as a low refresh rate can cause stuttering (or even the appearance of freezing), which can cause nausea.

The fine mesh-like effect of viewing an image rendered in pixels at close range, where the grid between pixels is visible. Higher resolutions (or proprietary solutions like that built into the Odyssey+) mitigate this effect.