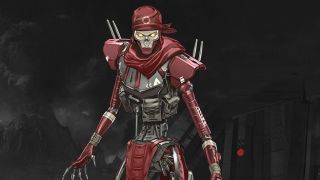 EA and Respawn revealed yesterday that the new character coming in season 4 of Apex Legends is a big, Doomfist-looking brawler named Forge. That may have come as a bit of a surprise to fans of the game: Our October 2019 report on "what we know about the next Apex Legend" was all about a completely different character named Revenant. It's based entirely on leaks and rumors, and sometimes these things just don't pan out, but as unsubstantiated stories go it looked pretty solid.

But wait! Revenant may still be lurking. This image posted to Reddit (via USgamer) was found stashed away on the EA Answers website. Interestingly, even though the very official-looking picture has been floating around for several hours now, EA has yet to take it down.

Another redditor, VonHollde, found another maybe-Revenant-hinting image in the background of yesterday's season 4 blog post. This one is a lot more tenuous to my eye, and a redditor named runchild made an animated version that, to be frank, doesn't convince me at all. I suspect that Revenant's presence in that muddled image depends largely on how much you want to see it.

That said, it looks an awful lot like Revenant will be joining the party at some point. Respawn and EA aren't shy about drawn-out teases for new characters—it took months for Crypto to go from rumor to real boy—and it's perfectly possible that they'll drop both characters in season 4, and not just Forge.

I've reached out to EA for more information, which I don't imagine will be forthcoming, but I live in hope. Meanwhile, you can catch up with everything that has been officially announced for Apex Legends Season 4, which begins on February 4, right here.