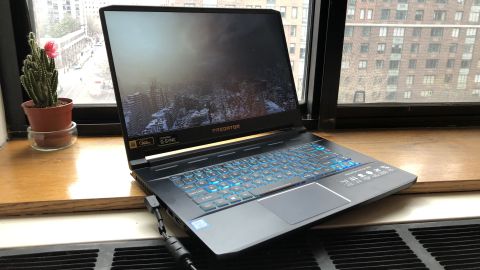 Maybe it doesn't have per-key RGB backlighting or an unwieldy big format display, but the Acer Predator Triton 500 strikes the near-impossible balance between performance, cost, and design in a form factor suited just as much for travel as it is for late night KDR reckonings.

Nvidia's RTX-series was a huge talking point for laptop makers at CES this year, despite its tepid commercial reception. But Nvidia's latest GPU technology is nevertheless impressive, even more so when added to any of our best gaming laptops, like the Acer Predator Triton. Seeing as portability improves pretty much everything, if you have the option to take something with you, why settle for a system that's tethered to your desk?

Considering the similarities in performance between a laptop and a desktop these days, a perfectly souped-up notebook is an easy sell—and the Acer Predator Triton 500 is the 15-inch, RTX 2080 machine to beat right now. With a sleek and understated Max-Q design, the Triton 500 is not only handsome, but it's powerful. Compared to its biggest competitors, the Razer Blade 15 and the MSI GS65 Stealth Thin, I wouldn't say it's affordable, but it is less unaffordable than the alternative.

But our review unit is most likely to catch your eye. Sandwiched between the base configuration and the top-end option, it still packs that tasty RTX 2080 performance. But for $2,499, something had to go. To achieve the best value, Acer shaved off 16GB of memory and cut the storage space in half. For gaming, 32GB of RAM is overkill anyway, while 512GB of storage is plenty enough to store several of your favorite games.

In terms of appearance, the Predator Triton 500 is subdued, an abnormality for Acer. Sure, it lets out a horrific unearthly screeching noise every time you boot it up, but otherwise it's quite restrained. By default, only the keyboard and the logo on the back light up, and the illumination is pleasantly dim. It does have the word 'Predator' imprinted on the lid, which isn't an especially welcoming invitation to chat when you're cranking out work at a coffee shop. But who knows—maybe you want to be left alone?

I can't stress how much I like the black and blue color scheme. From the rear exhaust to the WASD and directional key outlines, blue is a fitting—not to mention classy—accent for a gaming laptop, reminiscent of the blue raspberry artificial flavoring that defined my childhood. Made better by the warm embrace of its virtually featherweight chassis, I'm reminded that a 15-inch frame is the sweet spot for a Max-Q gaming laptop once again.

Weighing 4.41 pounds, the Acer Predator Triton 500 is a light travel companion. Much as I enjoyed my time with the Lenovo Legion Y740, lugging it around adds an extra two pounds to my commute load. The Triton 500, on the other hand, doesn't strain my arms and its slender body actually fits inside my backpack, unlike the MSI GS75 Stealth. Absolute game changer.

Plus, Acer's notebook offers similar performance for a hell of a lot less money than MSI's, and I'm happier with the touchpad and keyboard.

While the GS75 Stealth boasts a total key depth of 1.5mm, every key on the Triton 500 has 1.7mm and requires 70 grams of force to actuate. It has three zones of RGB lighting, as opposed to the GS75 Stealth's per-key backlit design. If there's one trade-off I can take like a champ, it's fewer garish lighting options in favor of good design.

The touchpad, while smaller than the iPhone X-size beast on the GS75 Stealth, is surprisingly accommodating on the Triton 500. It's a precision touchpad and, by default, its 'medium' sensitivity and cursor speed settings felt natural for basic navigation.

However, barring simple mobile ports and a handful of 2D indie gems, I wouldn't use any touchpad for gaming. Instead, I'd snatch up one of the best gaming mice or the best PC controller.

Performance and verdict: Should I buy the Acer Predator Triton 500?

Given its caffeinated 8th-gen Intel Core i7-8750H processor, it should come as no surprise that the Acer Predator Triton 500 delivered the goods in our exhaustive suite of synthetic benchmark testing. Paired with the slimmed down, Max-Q-ified Nvidia GeForce RTX 2080, it's striking just how many frames per second you can squeeze out of a laptop measuring less than three quarters of an inch thick.

Running Shadow of the Tomb Raider on ultra, I observed an average frame rate of 83fps. Acer made the right call by including a 144Hz panel in place of a slower 60Hz display. Cityscapes and over-the-shoulder action sequences alike are gorgeous on this matte IPS screen, even in 1080p.

Having said that, as someone who doesn't care about frame rates upwards of 60fps, I do wish there was the option of a higher resolution. I don't need 4K on a laptop that probably can't meet that threshold in the vast majority of modern triple-A games, but hey, a built-in 1440p monitor would be aces.

With ray tracing enabled in Metro Exodus, you can expect an average of around 56fps from the Triton 500. Compared to the MSI GS75 Stealth, Acer's RTX lappy fared a little better. Of course, it only garnered 4fps more than MSI's machine, well within the margin of error. Seeing that they're in the same ballpark at all reinforces my earlier belief that the MSI GS75 Stealth is overpriced. Unless your eyes demand the additional screen real estate, the Acer Predator Triton 500 is a better value.

But where the Triton suffers is in its battery endurance. Streaming a 24-hour broadcast from Red Bull on Twitch, it lasted a paltry 2 hours and 57 minutes, considerably less than the GS75 Stealth's 4-hour and 25-minute run.

The Acer Predator Triton 500 is an excellent piece of kit. Although its softened aesthetics are contradicted by the dreadful howling noise that erupts every time I boot it up, and its science fiction-inspired emblemage doesn't exactly scream 'burgeoning young professional,' it makes up for its glaring design oversights in other regards.

But it starts at $1,799, so it's a unicorn amid the exorbitant RTX laptop market. And to achieve that price tag, rather than compromising performance, it concedes the ostentatious cosmetic decisions brandished by competitors. In short, the Triton 500 is flawed yet fantastic, a portable powerhouse at a reasonable price. If you're going to fork over an obscene amount of cash to experience real-time ray tracing on the go, the Acer Predator Triton 500 is a worthy contender to the best gaming laptop throne.

Maybe it doesn't have per-key RGB backlighting or an unwieldy big format display, but the Acer Predator Triton 500 strikes the near-impossible balance between performance, cost, and design in a form factor suited just as much for travel as it is for late night KDR reckonings.

Gabe Carey
Gabe has been writing about the intersection of games and technology since the tender age of 16. Previously seen on TechRadar, Digital Trends and PC Magazine, he currently serves as a Senior Writer on the central hardware team spanning PC Gamer and GamesRadar. In his leisure time, you can find him amassing Razer products, playing games and watching superhero movies ranging from bad to mediocre in his cramped Manhattan apartment.
See comments
PC Gamer Newsletter