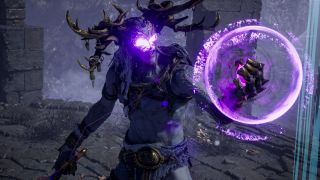 The launch of the action-RPG Rune 2 in November was odd, to say the least. The day after it went live on the Epic Games Store, developer Human Head Studios closed its doors, and then reopened them—the same day—as Bethesda-owned Roundhouse Studios.

Rune 2 publisher Ragnarok was left holding the bag, but the bag was empty: In a lawsuit filed in December, Ragnarok claimed that Human Head refused to turn over Rune 2 assets and source code, leaving it unable to deliver on promised updates.

That dispute may have taken a step toward resolution today, however. Ragnarok revealed earlier this week that it had received a hard drive containing the source code and other assets for Rune 2, and was in the process of ensuring that it is complete.

"Currently we have set up a build, test, and staging environment. Once we have confirmed that we are able to make a complete build of the current version of Rune 2 (.12L), we are going to begin working on a patch to address the top critical issues, bugs, and optimizations that we have seen reported over the last month and a half," Ragnarok said. "As always, thanks for sticking with us and being fans of Rune 2."

It's good news for fans of the game that an update is finally in the works, but despite the return of the game property, the legal action between Ragnarok and Human Head remains in place. "Currently, the Ragnarok Game LLC team's top priority is to support Rune 2 and evaluate whether all of Ragnarok's property has been returned," a Ragnarok rep said. "Nothing has been resolved on the legal front."

Along with the return of the game, which it apparently now has, Ragnarok is also seeking restitution for the development costs of Rune 2, and a minimum $100 million in damages.