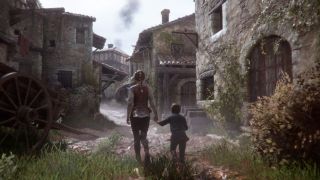 Xbox announced in a recent statement that a number of games would be added to the Xbox Game Pass for PC roster, including A Plague Tale: Innocence, Gris, ScourgeBringer, and Sea Salt.

Just last week, Game Pass for PC saw another range of games added to its fast-growing lineup, including Polish indie darlings Children of Morta and Frostpunk, the latter of which recently saw the release of brand new DLC—Chris Livingston tried to start a labour union in The Last Autumn and they "immediately fired his ass."

The statement also mentions plans to host Wasteland Remastered when it launches on February 25, 2020. Players partaking in the beta can pre-install Wasteland from January 30, meaning that they'll be able to jump right in when the game launches in a little over a month.

Finally, the statement mentions that Update 4 for Gears 5 is now live, which sees Kantus join the villain roster in Versus multiplayer.

If you haven't registered for Xbox Game Pass for PC yet, you're in luck. At present, Xbox is offering PC users three months for just $1, which provides you with access to over 100 games for free, including The Outer Worlds, Dishonored 2, Age of Empires 2: Definitive Edition, and Halo: The Master Chief Collection, as well as a diverse range of popular indies.

If you're of a mind to register for the Xbox Game Pass for PC beta, you can make the most out of the $1 deal by signing up here.

"Love those story-heavy games?" the statement concludes. "Check out some of the indie games you might have missed, like Oxenfree, Undertale, or The Banner Saga. Those games and so many more are all in our catalogue, so pick one and give it a shot."