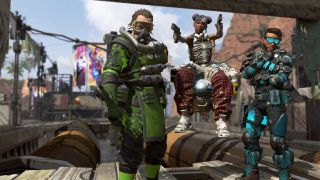 Apex Legends players live and die based on their mastery of its fast-paced combat and movement. That makes it all the more important that your settings in Apex Legends are tuned to produce the best FPS.

Luckily, even modest GPUs like the GTX 1060 shouldn't have a problem locking down 60fps at 1080p, let alone the more powerful best graphics cards. Apex Legends is built using Valve's Source engine, and based on our testing runs well on a wide variety of hardware. But to maximize your framerate, here's what you need to know.

Along with resolution, v-sync, and aspect ratio, there are 13 settings you can adjust. There's also a 144fps framerate cap in place, at least if you do the 'normal' thing and disable vsync. Turns out, you actually need to set vsync to 'dynamic' if you want a fully unlocked framerate. [Thanks for the heads up, mgz.] Either way, 144fps or unlimited, you should be able to put the best graphics cards and CPUs to good use.

There are no presets available, so all settings need to be manually adjusted, and many appear to have a minimal impact on performance, though in aggregate you can boost performance quite a bit in going from maximum to minimum quality. Here's a brief rundown of the settings, along with the measured difference in performance:

Anti-aliasing: The only options are none and TSAA (temporal AA), the latter being common these days. TSAA drops performance about 3 percent.

Texture Streaming Budget: Despite the 'streaming' part of the name, this just appears to be texture quality or resolution. You can set this anywhere between None and Insane (8GB), though settings beyond high recommend having at least 16GB of system RAM. Dropping from Insane to None improved performance by around 6 percent.

Texture Filtering: Affects the sharpness of texture details and the transition between different MIPMAP levels. Usually this doesn't affect performance much on modern GPUs, but switching from 16x anisotropic filtering to bilinear filtering improved performance about 6 percent.

Ambient Occlusion Quality: This setting affects performance the most, and it affects the quality of SSAO (the shadows in corners and such). Dropping from high to disabled improves performance by about 15 percent.

Sun Shadow Coverage: Appears to control the amount of shadows from the sun, probably some form of global illumination. Setting to low instead of high boosts framerates about 5 percent.

Sun Shadow Detail: As opposed to the amount of sun shadows, this controls the detail of the sun shadows. Setting to low vs. high improves performance about 3 percent.

Spot Shadow Detail: Affects the detail of shadows cast by point lights in the environment (ie, not the sun or global illumination). Disabling boosts framerates by 3 percent.

Dynamic Spot Shadows: Controls shadows from lights that can move. Disabling this in my testing caused no change in performance, though the specific scene might affect it more.

Model Detail: Adjusts the maximum level of detail for objects and characters. Dropping to low improves performance by about 6 percent.

Effects Detail: Determines the quality of visual effects like explosions, which makes this difficult to measure as testing during combat ends up being highly variable. There was no observed impact on performance in limited testing, but that didn't include a combat scene.

Impact Marks: Controls where and how many bullet marks show up. Didn't affect performance in limited testing, as bullet decals usually are easy to render.

Ragdolls: Controls the accuracy of dead body physics animations, which again makes this more difficult to measure in a meaningful way. The description in the game says this affects CPU load rather than GPU load.

Overall, going from maximum to minimum quality we measured about a 65 percent increase in framerates on a GTX 1060 6GB at 1080p. That means most of the above results are cumulative, so turning down Ambient Occlusion, Volumetric Lighting, and Sun Shadow Coverage as an example should boost performance about 28 percent. Faster GPUs can easily break 144fps, while slower GPUs will want to stick with lower quality settings to maintain 60fps if possible.

We did some limited benchmarks of Apex Legends at launch launch. Since this is a free to play game, of course, it's easy enough to find out how well it runs on your PC: just download it and give it a shot. It's a 12.77GB download (for now), which isn't too bad.

I've only done limited testing for now, using the training area after checking that performance isn't substantially different than in the main game. All testing was done with an i7-8700K processor, and I tested at minimum quality 1080p, and maximum quality 1080p/1440p/4K. I'll see about adding additional results over the coming days, but here's what I found right now.

Moving to the budget territory, a GTX 1050 Ti barely managed to average 60fps at 1080p minimum quality, and dips below that occur regularly. 1080p max drops performance to around 35fps, and at 1440p max it's sitting right near 20fps. Basically, if you want a steady 60fps, you'll want something faster than a 1050 Ti, meaning GTX 970 level or better.

For high-end GPUs, I checked the RTX 2080, which generally performs about the same as the GTX 1080 Ti. 1080p hits the 144fps framerate cap with vsync disabled, regardless of settings, while 1440p drops to 113fps at maximum quality, and 4K max runs at 63 fps (with minimums of around 50fps). Tweaking a few options should get 4K easily above a steady 60fps, and 1440p at 144fps is also viable. (I'll be retesting with vsync set to dynamic for a more detailed analysis in the near future.)

As for CPU requirements, I didn't get a chance to test AMD processors yet, but an i5-8400 ended up delivering the same sort of performance as the overclocked 8700K, at least when the 144fps cap is in effect. At 1440p and 4k, performance was also basically the same, so CPU requirements don't appear to be particularly steep. Then again, perhaps a 4-core chip would prove otherwise.

The short summary then is that 60fps is totally within reach of midrange hardware, though not necessarily at maximum quality. If you have a budget system, you might need to drop your settings to minimum to hit 60fps, and even then may still come up short, but 40-50 fps still works well enough if you're not ultra-competitive.