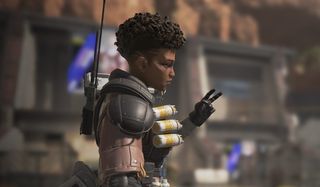 Apex Legends' Season 1 battle pass took some heat for being relatively unexciting. Instead of offering players rewards for accomplishing specific tasks, it was all about participation: Play the game, get the stuff, have a nice day. Respawn said in May that Season 2 will feature a more complex battle pass with daily and weekly challenges, and today lead producer manager Lee Horn explained exactly how they'll work.

Each player will be given three daily challenges, chosen at random from a pool of more than 200, which are meant to be achievable in single, short play sessions—things like dealing a certain amount of damage in a specific location, or playing a game as a particular character. Weekly challenges, doled out at a rate of seven per week, are tougher and will (probably) take multiple sessions to complete: Loot 100 Epic items, get 20 kills as Gibraltar, stuff like that. Daily challenges reset every day but weekly challenges will stick around, so you'll be able to catch up on the ones you missed if you start the season late.

On top of the regular daily and weekly challenges, there will also be three "weekly resetting challenges," which will be reset every week whether you've finished them or not:

The final quest in the list can be repeated an unlimited number of times each week, but the requirement will go up: Each time you hit the 9,000 mark in Stars or XP, the goal will increase by 9,000, up to a maximum of 54,000—so 9,000 for the first battle pass level, 18,000 for the second, and so forth until the weekly reset.

The daily and weekly challenges are intended to be varied and rewarding, but not overly complex: "We're endeavoring to balance gameplay purity with variety and fun, so none of this Season’s challenges will require a YouTube tutorial to figure out," Horn wrote.

Apex Legends Season 2 will begin on July 2. Respawn dropped not just one, but two launch trailers yesterday teasing some of the changes coming to the game, including a very different Kings Canyon than the one we're used to.