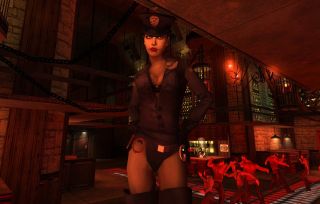 It's a sign of just how good the 2004 RPG Vampire: The Masquerade—Bloodlines is that unofficial fan patches were still being made a decade after it came out. But earlier this month, something even bigger came along: Bloodlines Antitribu, an expansion and modification that adds seven new vampire clans and ten new disciplines, plus new quests, maps, and over 100 new characters.

To call Antitribu "big" would be to call the ocean "wet": accurate, but far from sufficient. A detailed list of what the mod brings to the party can be had here, but the big points, alongside those already mentioned, include a completely new combat system with kicking and blocking, new models, textures, and sounds, a new item system, improved AI, new particles and blood stains, and even some adult-only content.

The mod was originally released on February 6, and a 1.1 patch that will make numerous fixes and dialog updates is expected to be ready for February 21. "For now we will try to include the full dialogs for every clan and fix all these random bugs and then when the mod is stable enough we [will] start re-adding the quests one by one—particularly the sabbat one which I really want you to experience but I am afraid if you see it with the current bugs it will kill the experience for you," the developers wrote. "Also you can enjoy everything the mod has to offer in the meanwhile so when the new quest comes you won't get distracted by everything added to the mod."

As we noted in our list of the best RPGs of all time, Bloodlines was kind of a buggy mess when it was originally released, but it nailed the neo-gothic atmosphere like nobody's business and introduced some really fantastic supporting characters along the way. It's come a long way since—speaking of which, it's worth noting that Antitribu includes the Companion Mod in its entirety, but is not compatible with wesp's unofficial patches—those being the ones mentioned above, that have done so much good over the years. Find out more at BloodlinesAntitribu.com.