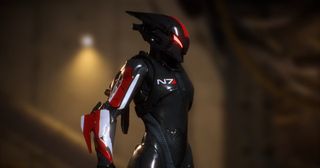 Very spiffy! I’m getting a Turian vibe, too, probably because of the shape of the helmet. I’m a sucker for anything Mass Effect (give it a few years and I’ll be an Andromeda apologist) so this automatically makes me significantly more excited for Anthem. I’m so easy.

As PCGamesN notes, this isn’t the first time BioWare’s dangled some bait in front of Mass Effect fans. Another set of N7 armour appeared during a stream, though this time it was for a Ranger Javelin rather than an Interceptor, like the one tweeted by Gamble. So it’s N7 skins for all, it seems.

Though it’s on hiatus, BioWare has said that Mass Effect isn’t dead, and Anthem isn’t a replacement for it. If you’ve got a craving for more Mass Effect, even though N7 Day is over, don’t forget that there are a bunch of recently updated mods for Mass Effect 3.

In the meantime, this is everything we know about Anthem so far.